At long last I have Yellow-billed Loon on my Boulder County (Colorado) list! More importantly, this is the most cooperative YBLO I've seen, observable at times from within 100 yards (with the resultant good photo opportunities.) It has been on Erie Reservoir for three days now, first reported by Walter Szeliga the morning of Thanksgiving Eve. This lake is only about 300 yards wide, and with the bird often hanging out within the southern half, the winter sun coming from behind us, and an elevated trail to set up on, viewing can be excellent. When I saw it on Nov. 22 photographic conditions were a bit challenging, with a pretty stiff wind whipping things up and the loon moving around actively. The waves in some of the shots were pretty dramatic, though (as long as I was focussed on the bird, not on a wave crest...) Out of over 400 digiscoped shots I ended up with a few keepers- here are my favorite two from day one: 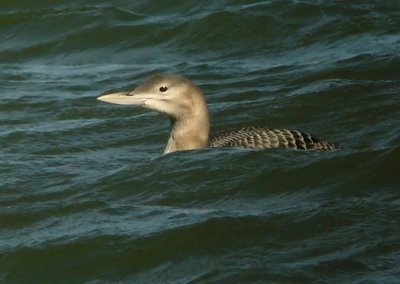 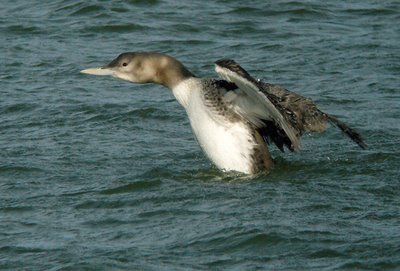 Today (Nov. 24) was a different story- the wind was light and the bird was taking it easy. In about two hours of observation it only dove for one brief period, catching sizable prey and swallowing it. For the rest of the time the bird lazed around, appearing to sleep when it wasn't preening. The bad news was that the bird didn't get as close as it did two days ago in the wind, but after a while it was well within good digiscoping range. After shooting a bunch more stills, I got the idea to try shooting some digiscoped video- what would you call that, videoscoping? All I can say is gee, why didn't I try this before? I just kept everything the same on my digiscoping rig and switched the camera to video mode.

It appears as though YouTube compresses the video quite a bit so it doesn't look as clean as I'd like. Good news is it streams pretty well on most reasonably fast connections. If you have fast internet service you can try this link to a better version, although it is about 6 MP. The original is the best, but at 82 megs you'll have to come on over to see it.

Here are a couple of stills from today. 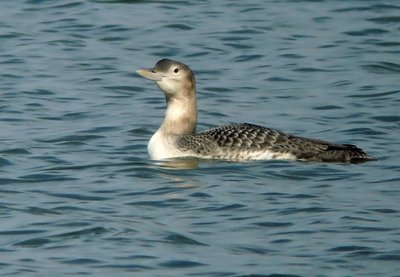 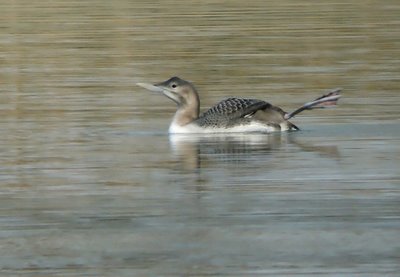 Notice the pink webbing on the foot- sweet, huh? Reminds me of the yellow webbing on a Wilson's Storm-Petrel foot. Know of any other birds with brightly colored webbing but dark toes?

Unfortunately, the bird appears to have an injury on the lower right side of its neck. Maybe it was injured by an eagle, or maybe got a fishing hook gouge? Both times I went to see the bird it seemed to be spending a lot of time preening, especially its neck. Today Brian Gibbons and I also noticed that it was keeping its right eye closed a lot, even when it seemed to be awake. It can open its right eye, but perhaps the neck injury is bothering that eye as well? Whatever the case, hopefully Erie Reservoir will provide the food and rest the bird needs before it ices up. 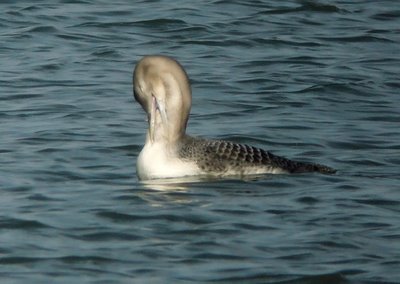