Many ducks, especially drakes, have wonderfully iridescent feathers on their heads & wings. This type of coloration is not due to pigmentation. Instead, it is due to microscopic structures that cause constructive & destructive interference of light waves, creating the changeable metallic sheen of iridescent feathers. For more on multiple-beam interference and some great examples of iridescent structures (non-living & living), click here.

Many birds are well-known for their distinctive iridescent feathers, including hummingbirds and peacocks. But the reason I'm bringing this up with ducks is that their head colors don't always match what you'll find in field guides. A hallmark of iridescence is that the colors you see can change depending on the angle that the light is hitting in reference to your vantage point. For ducks with iridescent heads, the color(s) illustrated in field guides may be typical under most conditions, but you will see differences if you watch ducks long enough.

Take, for example, these nice male Northern Shovelers I saw last weekend. In situations where the bird is well-lit by sunlight from generally behind the observer, the nice metallic green head exhibits itself, matching my field guide illustrations. 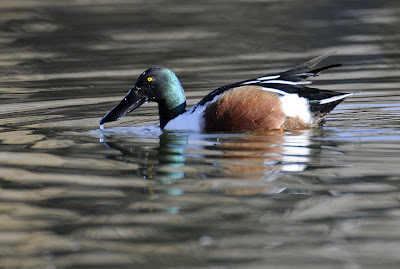 But when the bird is backlit, the head looks about black. Iridescent feathers often have very dark pigmentation, and when sunlight is insufficient to create the wave interference patterns responsible for iridescence, the ground color shows through instead. 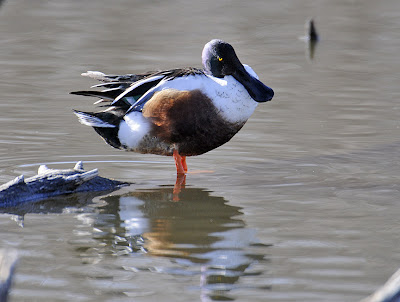 It gets fun when sunlight hits the shoveler at an obtuse angle (a nearly backlit bird), resulting in an intense purple iridescence where the bird normally would look black or green. 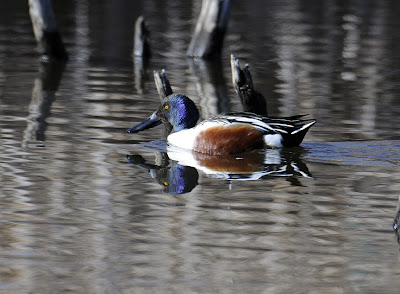 In some guides, our two scaup species are shown with different head colorations on the males. Lessers are painted with purplish heads while Greaters show greenish heads. Again, this may be the case in many light conditions, but either species can show plain black along with metallic green or purple sheens depending on the lighting. In other words, I'd rely on other field marks besides head color in Scaup. So why is this a Lesser Scaup? I first key in on head shape. While that, too, can vary depending on how the bird holds its feathers (relaxed vs. alert, for example), the peak of the crown is consistently behind the eye, often quite obvious as a little tuft vs. the subtler peak on Greaters. On a Greater, the peak is above or in front of the eye. Also, the nail (black tip area) on the bill of this Lesser Scaup is fairly small and parallel-sided, vs. the larger, wedge-shaped nail on a Greater. Greater bills also look bigger to me- more dramatically-schnozzed birds. Here's the same cooperative Lesser Scaup that I posted previously, in various poses showing purple, black, and green head aspects: 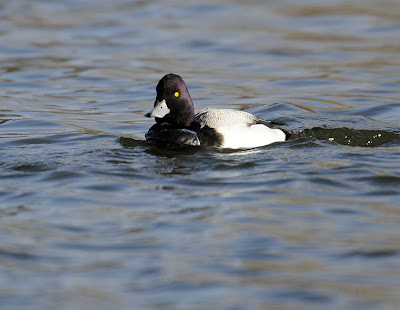 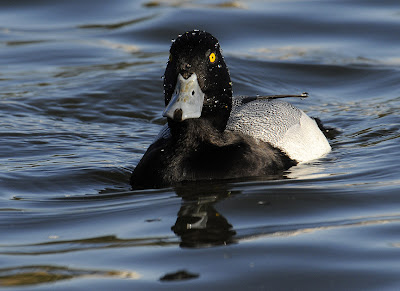 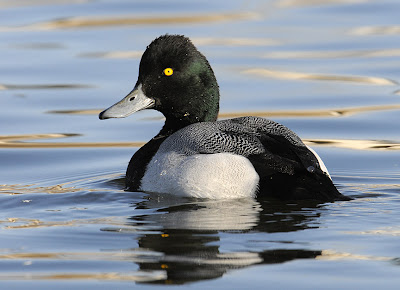 So keep an eye out on iridescent duck heads- even the classic "green head" Mallard can look black or purple instead.
Posted by brdpics at 11:17 AM

Thanks for the primer on iridescence.