I was granted a few hours last Sunday morning to go birding, so I grabbed bins, scope, and cameras and hit the road to some local hotspots. Heading towards Boulder Reservoir, I ran into swarms of runners on the nearby roads and remembered that the Boulder Backroads Marathon was in session, with the start and end at the Res. Needless to say, I changed plans to avoid the mob scene there, and diverted to Walden Ponds. That turned out to be a fortuitous choice, as some nice birds were working a patch of pond near a rocky point.

I slowly insinuated myself down to the water's edge, aiming for a small cluster of stumpy snags to sit among with my feet practically in the water. I moved very slowly, waiting when possible for birds to get to the far part of their circuit to make incremental movements until I got where I was going. Then I just sat, letting the birds get used to me (which they did in about 10 minutes.) Then it was a matter of waiting for good light on the partially cloudy day, watching for interesting behavior as the birds got close to me.

Among the birds was a small group of migrant American Avocets, now almost totally in basic plumage (a few had a wee bit of salmon coloring left.) They flew in and waded their way over towards me, staying in the same room-sized patch of the large marsh for almost two hours- must have been keying in on some extra tasty prey there. Luckily, that's where I was planted, so I got some fun shots. While they occasionally worked the muddy shore, more often they were out in pretty deep (for them) water, tipping their whole heads under water like dabbling ducks to reach the bottom. I think they were swimming much of the time instead of wading- pretty cool to see that behavior in a shorebird (I also watched a Greater Yellowlegs swim across the pond instead of wading or flying.) 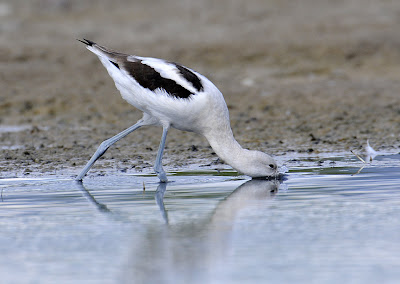 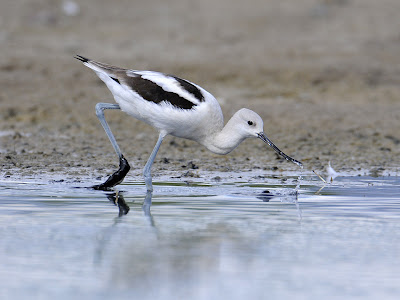 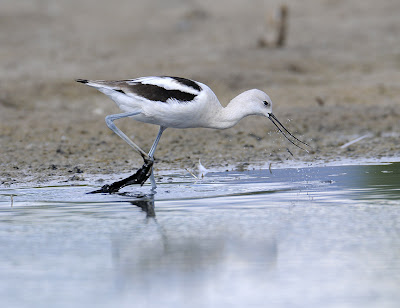 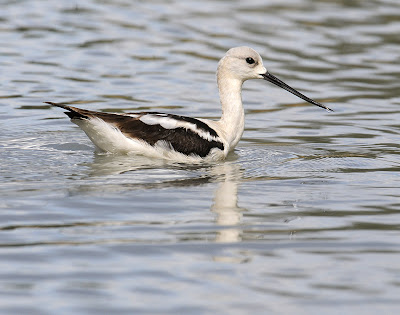 The birds that drew me to the spot in the first place were 3 Snowy Egrets. I didn't really have much in the way of good Snowy Egret photography prior to Sunday so I was hoping they would cooperate, and they did! Like the Avocets, they kept looping back and forth through the same small section of the bigger marsh, snagging small fish from time to time. They completely adjusted to my quiet presence among the stumps and would come by quite close, fishing as they went. Sometimes they would squawk and chase each other, but even the ones that got run off would slowly work their way back, trying to avoid the wrath of the dominant bird. The last two pics were taken sequentailly 1/5 of a second apart- those egrets are quick! (Click to enlarge the image and you will see the fruit of the egret's labor, looking pretty bummed about the whole deal.) 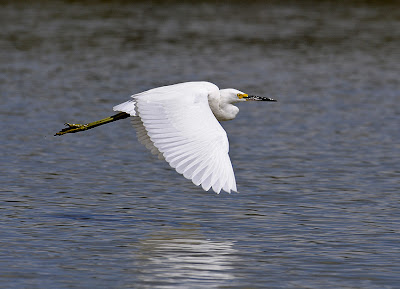 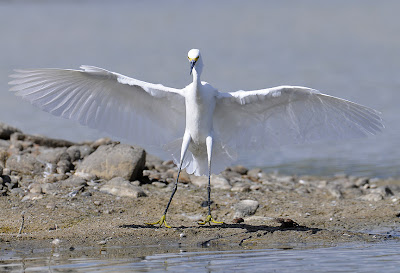 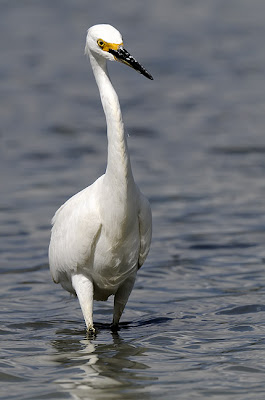 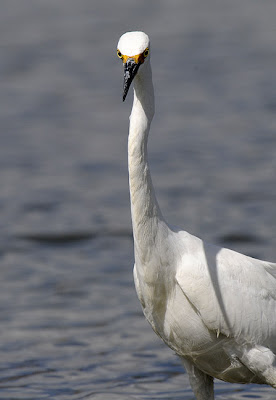 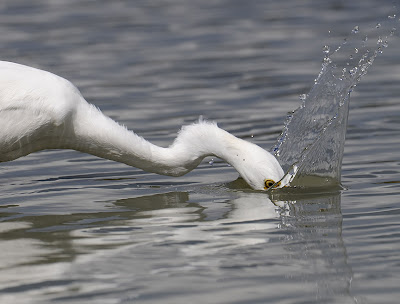 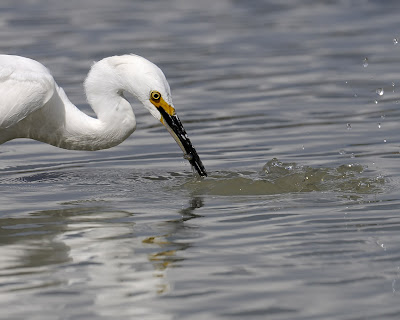 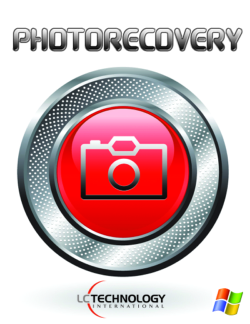 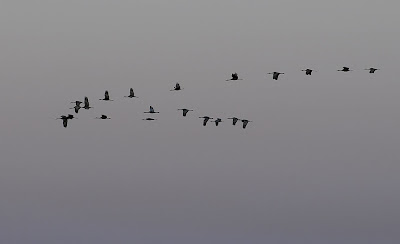 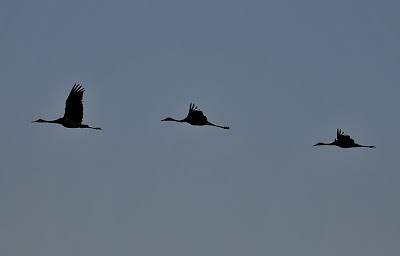 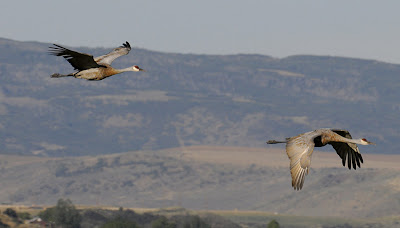 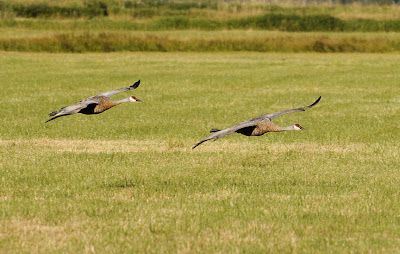 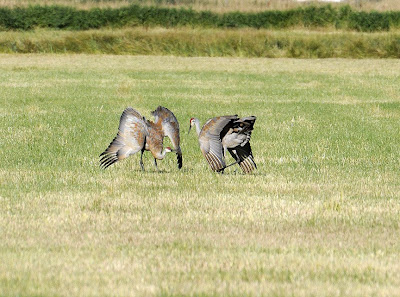 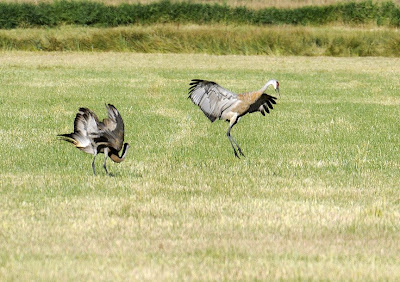 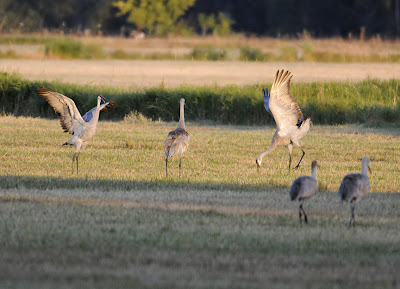 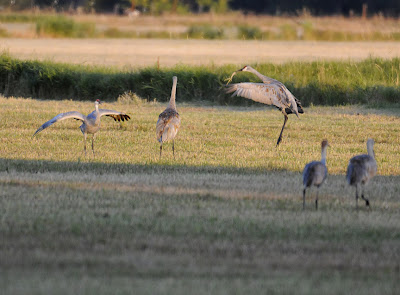 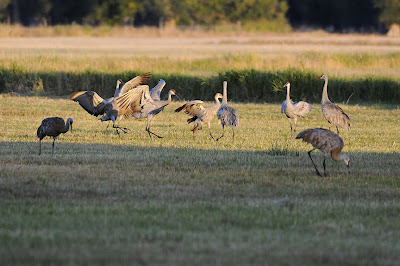 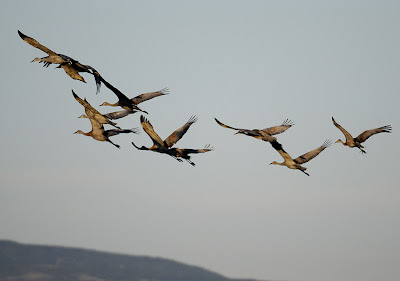 I peeked at a preview copy at the ABA's annual convention in Utah last summer, and was impressed with the look and feel of the guide. But what is really cool to share with you all right now is the series of podcasts (33 episodes totalling nearly 3 hours of content) that Bill Thompson III and Jeff Gordon produced as digital supplements to the book. I am honored to have contributed photos for the project, and encourage everyone to check them out. The podcasts include family overviews, species profiles, tutorials, and RTP biography episodes. There's lots of info for birders of all skill levels. While I haven't watched them all yet I know I will- they offer a great way to review bird families quickly, kind of like video birding Cliff Notes. For beginning & intermediate birders this will be an awesome resource, distilling the decades of birding experience & accumulated knowledge of BT3 & Jeff Gyr into potent digests. Watch the intro podcast at the top of the page first- it sets the stage really well. Nicely done, gents- I know RTP would approve! 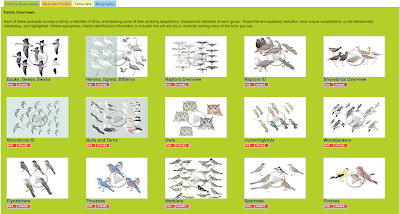