From the American Heritage online dictionary:

bon·ny also bon·nie (bŏn'ē)
adj. Scots., -ni·er, -ni·est.This definition certainly fits the Bonny (State Park, Colorado) Christmas Bird Count, which I did last Friday, 5 January. Twice postponed by blizzards, we squeezed in the count on the last day of the official counting period despite round 3 (yes, three) of heavy snow in Colorado in the last few weeks. The midnight owling weather was fine, with nearly calm, moonlit conditions (we recorded Eastern Screech, Great Horned, and Long-eared Owls.) The morning portion of the count had pretty steady snow blowing from the north- not very good counting conditions but we prevailed. By lunch it had stopped, and we cleaned up some good birds in the afternoon. 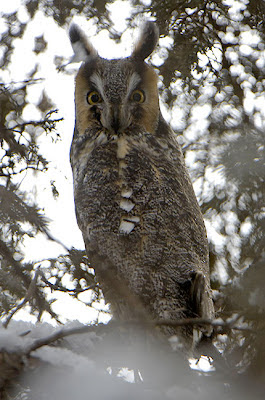 Bonny is known as a great birding area, with riparian woods along the N. Fork of the Republican River, a good-sized lake, and smaller ponds and marshes downstream of the dam. These are surrounded by shortgrass prairie pastures, agricultural fields, farmsteads, ranch headquarters, feedlots, wind breaks, and the hamlet of Idalia, providing a nice variety of habitat within the count circle.

Successive blizzards rendered the lake mostly frozen, but there was open water in the marshy outlet below the dam providing haven for key birds. Walking the productive woods and wind breaks was made difficult by shin-to-thigh deep snow, but new finds were that much more rewarding in the heavy snow cover!

Only five of us survived the attrition of twice re-scheduling and having to count on a weekday. Glenn, the count compiler, did an excellent job of arranging food and lodging at the Colorado Division of Wildlife's Bonny workstation bunkhouse. His potato/sausage/kale soup shored us all up at lunch and gave us the energy to plunge back out into the wintery landscape again for the afternoon session. Prior to that, Paul jump-started us all with French toast- a lot better than the energy bar I was planning on. Alison's salad, bread, and snack treats kept our taste buds happy throughout the day. And Joey's lasagna for the compilation dinner was a fantastic conclusion to the day's menus. (What did I contribute? Mini-marshmallows shot out of a marshmallow gun that Tony gave me in anticipation of duels and shoot-outs while waiting for the midnight hour's owling to begin. But alas, Tony couldn't make the re-scheduled count. Next year...) 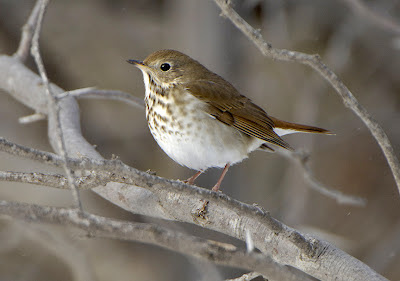 The silver lining of the re-schedule was that I got a great jump on my 2007 list. Birds that are tough in most of Colorado but regular at Bonny like Eastern Bluebird and Red-bellied Woodpecker came through as usual. Winter plains birds like Lapland Longspur and Common Redpoll got my attention and appreciation. Turning up unexpected birds is one of the most enjoyable parts of doing a CBC. Our group of three (Glenn, Paul and I) had some real goodies including Brown Thrasher, Mountain Bluebird and Hermit Thrush. But our best bird was a Slate-colored Fox Sparrow. While the race breeds in Colorado, it is only accidental on the Eastern Plains. Throw in the January timing and the bird is especially noteworthy- checking the CBC archives, only one other Slate-colored Fox Sparrow has ever been recorded on a Colorado CBC (of course, a few may have been generically recorded as just "Fox Sparrow", but I'll bet the overwhelming majority are Red Fox sparrows, rare but expected in the winter.) Further underscoring the bird's unexpected status, only one has ever been formally documented in Kansas. (A sliver of the Bonny circle is in that state.) They have been reported a few more times in that state, but it seems like birds need that "full-species" status sometimes to get the attention they deserve. 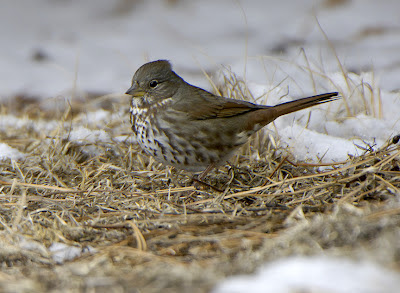 Thanks again, Glenn, for lining this all up- I'll see everyone out there next time!

What a terrific account and great accompanying photos. I'm amazed at how much Fox Sparrows vary in their appearance across their range. Thanks for sharing.