First of all, some of you will probably recognize this bid cam and if so, it won't be much of a mystery to you.

So this morning I checked a local nest box cam, and saw these tracks in the snow that fell last night: Here's a hint for the uninitiated- this box is about 260 feet up a decommissioned smoke stack at the Valmont Power Plant run by Xcel Energy in Boulder, Colorado. (aside: what the heck kind of name is Xcel? Can't spell Excel?? What was wrong with their previous name, Public Service Co.???)

So, my dear Watson, the tracks probably aren't from a terrestrial animal, unless it has learned to climb the ladder up the smoke stack.

A neat thing is that the camera's web page also has running archives that keep the previous 24 hours of footage recorded every two minutes for review. So I started going back hour by hour to see when the critter left the tracks. Finally, I got to the 1 am block, and the first image showed blank snow so I knew I was closing in on the culprit. The image series up to 1:21 am was blank: 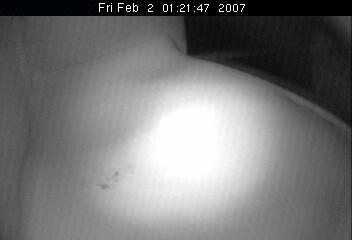 The next pic caught the perpetrator at 1:23 am. In the following image taken two minutes later it was gone, but the successive images preserved the tracks. Do you have your guess?

Is that your final answer? Well, then scroll on down... 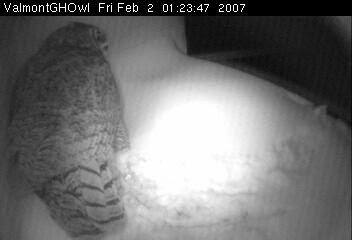 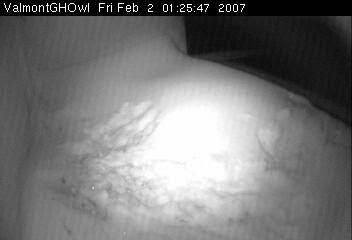 Yeah- it is a Great Horned Owl. For the past several years, Great Horned Owls have nested up high on the smoke stack in a box initially intended for Peregrine Falcons. Dave Madonna, the plant engineer who oversees the owl cams on the property (they also get nesting Barn Owls) told me that the Great Horned Owls began investigating the box earlier this month- ahead of last year's schedule. While you can't see it in the snow, there is now a little dish scooped out of the substrate in the back corner of the box- presumably where the eggs will be laid. Of course, GHOWs are known for nesting really early- it wouldn't surprise me if this cam shows an incubating owl soon but for now these quick midnight nesting box checks are the M.O.

Once the chicks are hatched and the parents start relaying back food, it is fun to play "guess the prey." These owls seem to eat lots of birds, not surprising since the entire power plant complex has been declared an Audubon Important Bird Area. Even though many of their bird victims appear to be Rock Pigeons, they also catch things like Northern Flickers and once I saw an American Kestrel laid out for chicky din-din. Rabbit parts are frequent on the menu as well, but often the remains are unidentifiable, at least by me. It is also fun to watch fledged chicks make forays out onto the perch in preparation for their first flight- and at 260 feet to the ground, they are guaranteed a looooonnnngggg first flight!

To watch these events unfold for yourself, stay tuned to the Xcel owl cam. Oh, and I challenge anyone's local GHOWs to break this record of nesting 260 feet above ground level!

Postscript: Check out these pics from the evening of 2/2. Looks like the GHOW came back to clear out a little snow! The bird stayed for about 1/2 hour from 8:00 to 8:30 or so (note the bird perched outside in the last pic of that series), and then cleared a little more snow just before 10:00. In one of the pics it almost looks like it was doing the towhee shuffle to get the snow out of the nest cup. Guess I'm not the only one who's been doing snow removal lately!! 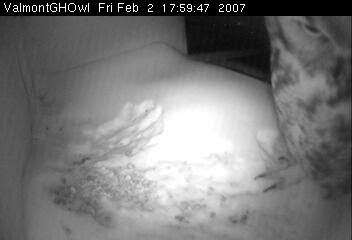 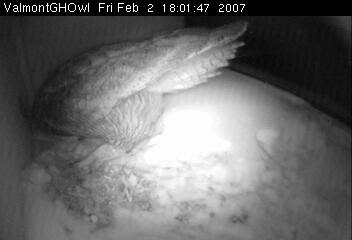 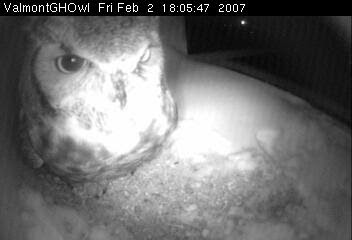 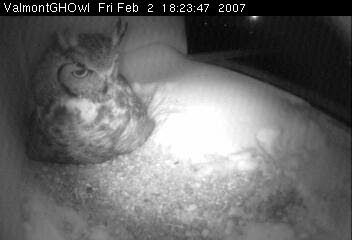 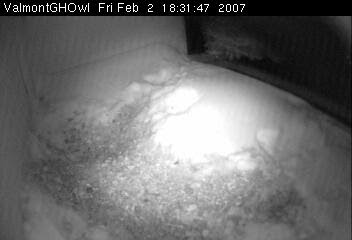 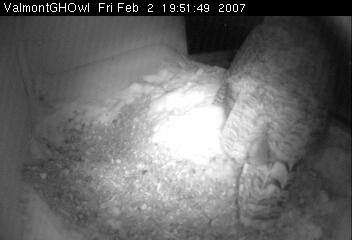 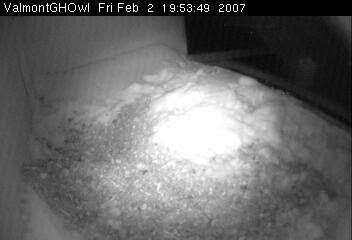 I love the OwlCam! I saw a great horned owl sitting in a cottonwood tree at Foothills and Pearl last week at about 8:30AM. But the OwlCam gets an up close look!

The owlets in Bakersfield are about a week old now. Great camera action there if you like bird cams.