Well, it's a marvelous day for a sky dance!

(Sorry for the title, Van Morrison!)

I had a real birding highlight last weekend watching the sky-dancing aerobatics of a male Northern Harrier south of Greeley, Colorado with my dad Jim and Warren Finch, a birding buddy we ran into there (one of those guys with a KILLER birding name!) I'd seen this display only a couple of times before, both at a fair distance yet still very cool. But this chap was doing his thing quite close to the road, at times so close I just watched, slack-jawed and stunned, without need of bins or even the thought of trying to catch anything on (digital) film until I snapped out of my reverie.

The show began as we watched the bird bringing nest material from a meadow across the road into a large cattail marsh and delivering them by hover-landing straight down into the marsh. 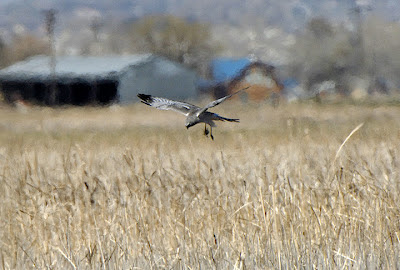 After a few deliveries it whipped into its sky-dancing routine above the spot- amazing speed and aerial agility accompanied by understated kyakk kyakk kyakk... vocalizations. The bird would do these crazy inverted rolls at the top of every climb followed by sickening plunges nearly to cattail-top, when the bird would somehow reverse it all and seemingly break the rules of physics to climb again as fast as it came down. The whole show seemed to happen without acceleration or deceleration- just full-time full warp speed, kind of like a bottle rocket whose stick snapped off. If anyone describes the harrier sky-dancing flight as being like a roller-coaster they are seriously understating the speed and gyrations involved. When I decided to get my trigger finger in gear I had a heck of a time trying to even get the bird in the frame, much less holding it centered enough for auto-focus, but I did squeeze off a few bursts at 5 fps on the ol' D2X.

Sometimes when I get a hawk or other bird doing something cool like that but none of the individual images are really great, I'll stitch together a sequence to give a sense of the motion I saw in the bird. These two montages are continuous sequences- only a fifth of a second between each pose and no missing frames. Check out the first two frames of the second sequence- that guy leads out of the inversion with his head, facing it around while his body is still belly-up at the top of one of his neck-snapping rolls! 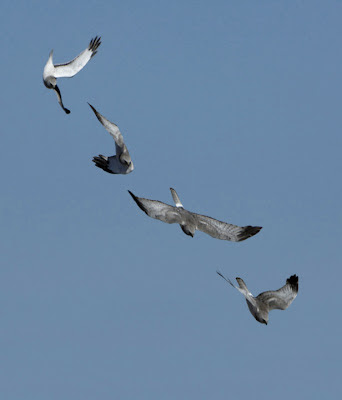 The festivities wrapped up when he landed again out of sight in the marsh, presumably to visit (ahem) the hidden female beneficiary of his show. Then he emerged out of the cattails and flew off to hunt some more around the periphery of his marsh. What a show! 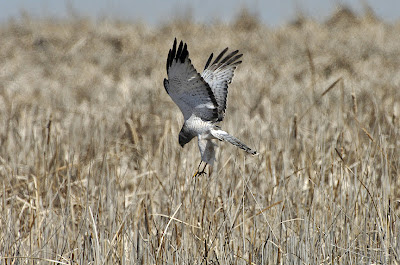 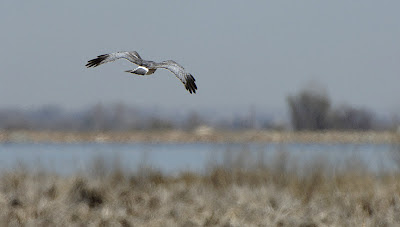 Great sequence of shots Bill. I seem to recall that you had described how you pull the images together into one photo on your blog but can't remember where - can you point me to that entry?
John

Wow, those aerial courtship sequences are just superb. Obviously the file size isn't seriously compromised in the rapid-fire mode. The point and shoot digicams I use give small files when using the "burst mode". Looks like I need to upgrade!