(with apologies to The Rolling Stones for the title...)

So a few weeks back when I was in Louisiana for the ABA's annual convention, my first trip was to Lake Fausse Point State Park. The trip started pretty well when the bus unloaded right under a cooperative Barred Owl- dang cool! Why are the birds seemingly so cooperative down south and so secretive up north?? Maybe has something to do with the subspecies?? Ned Brinkley mentioned that these southern birds have bare feet, while the northern ones have feathered footies. 'Ya learn something every day, especially when birding luminaries like Ned are around. 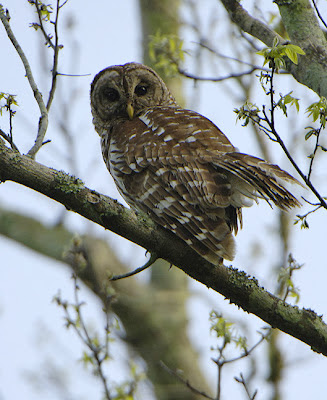 The highlight of the trip for me, though, was a Red-shouldered Hawk family nesting prominently in the middle of a groomed picnic area. Mom & dad were in attendance, taking turns bringing in leafy branches- an interesting behavior. At least one chick periodically peeked out from the nest, but I'm not sure of the count since I only saw one at a time. It was really neat to study these forest-loving birds in a fairly open setting- by far these were the best prolonged looks I've had of Red-shouldered Hawks. They seemed really pale, particularly in comparison to birds I saw in California last fall. In the Sibley guide these seemed closest to his illustration of Florida birds- I wonder if that subspecies or a similar one wraps around some into Southern Louisiana, or if they just show a lot of variation like many other buteos. 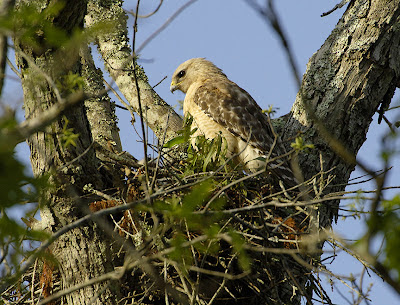 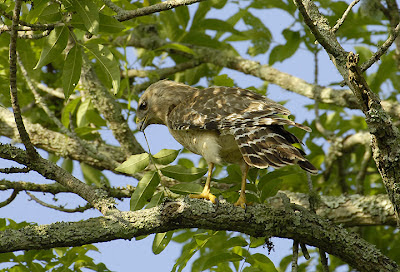 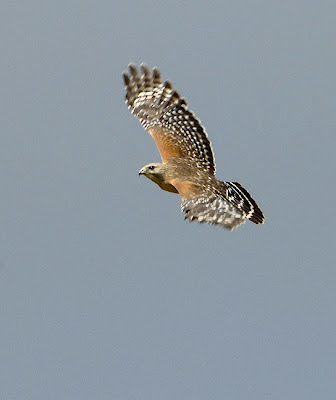 One of the adults took a break, perching in another tree near the nest. Apparently, this was some kind of social gaffe in the eyes of this Blue-gray Gnatcatcher. Taking umbrage that the hawk was in its tree, the wee gnatcatcher dive-bombed the hawk, even making contact with the hawk's crown on the most daring dives. The hawk reacted by totally ignoring its diminutive tormentor, dozing lightly, peering about, and preening throughout the sporadic attacks. The gnatcatcher didn't relax, though, insisting on staring down the hawk from a nearby elevated perch when it wasn't in active attack mode. 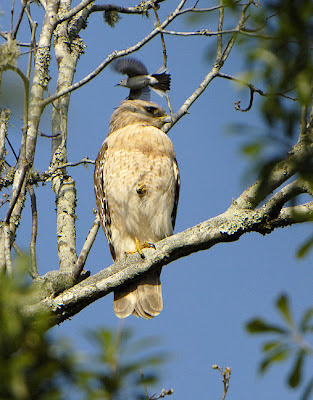 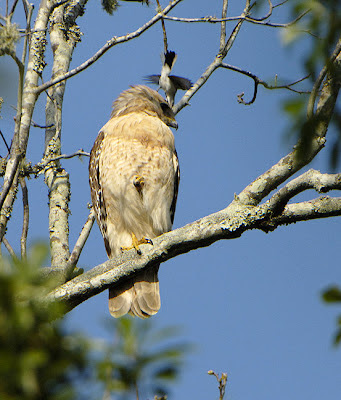 All of this was fine and dandy, but then the icing on the cake came when one of the adults approached the nest calling loudly and carrying a snake. Fortunately, it detoured to another tree, maybe awaiting clearance for its final approach. The delay let me run (literally) down the road a bit in anticipation of the bird flying across to its nest, getting the sun behind me. There wasn't anything I could do about the overcast sky, but I was pretty darned pleased with the result. My naturalist friends tell me that this is a Rough Green Snake. It might be my favorite picture so far from 2007. 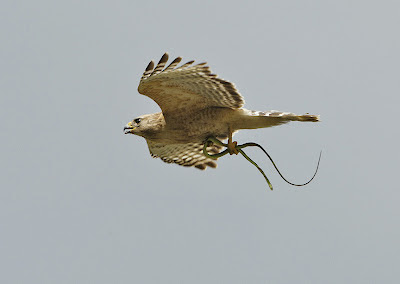 Wow. Those are absolutely amazing! I just love seeing your photos!