As the July heat sets in, it is nice to have Arctic Tundra within easy day-trip range. For Colorado's second Breeding Bird Atlas, I've got a priority block within the East Portal quad that encompasses some of this wonderful habitat, along with other high-elevation habitats like Krummholz, Spruce/Fir, Aspen, Lodgepole Pine, and Willow wetlands. The block also contains the Moffat Tunnel, a 6-mile bore that crosses under the Continental Divide, carrying heavy railroad traffic including Amtrak's very cool-named California Zephyr. Gotta trek to the W. Coast by train someday, but I digress...

Anyway, I went up to the highest parts of my block a few days ago to do some atlasing as well as to just enjoy the tundra environment. My luck was in when I drove the old Rollins Pass Road up from Winter Park, as I heard the ruckus of woodpecker nestlings being fed. Stopping to check, I found an American Three-toed Woodpecker nest right along the road in a small aspen grove. Very cool birds. Hey- did you know that with the re-name (used to be just Three-toed Woodpecker, but now split from the Euro birds), this is now the longest name for an ABA-area bird? Alas, not in my priority block but still a good one to document nesting for the atlas. 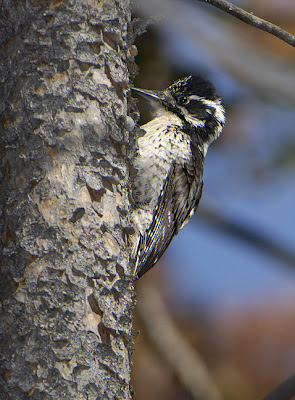 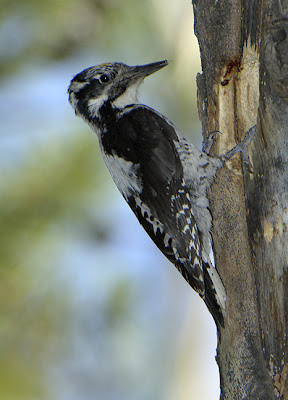 This Broad-tailed Hummingbird perched nicely along the road, too. 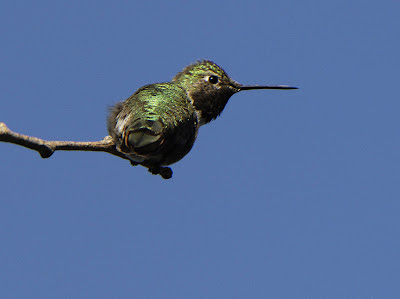 Heading on up, I parked above the tree line as near as I could get and walked the rest of the way up onto the ridge line and into my priority block. (There is only one road leading into my block and that is down low along S. Boulder Creek, following the railroad until it enters the tunnel.) The first part of the slope has an extensive patch of shrub willows, and amidst the ubiquitous White-crowned Sparrow songs I heard the buzzy song of a Brewer's Sparrow. The question remains as to if these high-elevation Brewer's Sparrows in Colorado have dispersed up from their normal sage-shrubland habitats, or if they belong to an undocumented southern population of "Timberline" Sparrows (taverneri Brewer's Sparrows, found above timberline in Alaska and NW Canada.) Folks are working on it- probably need sonograms and/or genetic samples to solve this problem definitively. Anyway, here's the singer- looks big-billed for a Brewer's Sparrow, doesn't it? 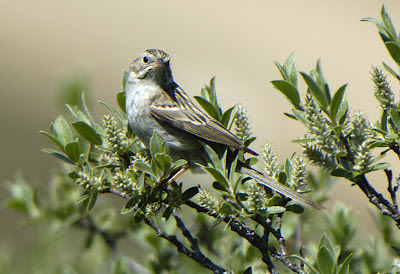 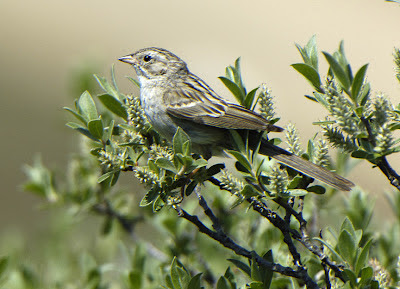 At the highest point in my block (about 12,200'), I chose a perch to eat lunch that overlooked two cliffy cirques with a sharp arête separating them and was rewarded by a couple of Brown-capped Rosy-Finches swooping through a slot in the ridge between basins. Unfortunately, the closest I came to getting White-tailed Ptarmigan was finding a few molted feathers and droppings- I know they are somewhere up there but haven't pinned them down yet. Beyond that, I was able to record the expected tundra birds like Horned Lark and American Pipit. But in-between birds it is hard to ignore the butterflies that often concentrate on ridge and hill tops. So I'll leave you with some of the bugs- IDs are tentative since I don't know much about Butterflies. 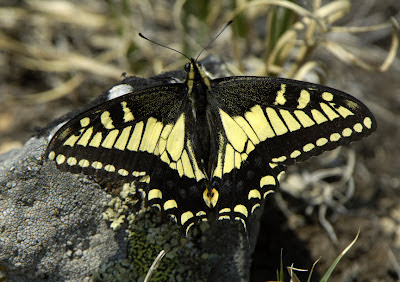 Anise (Nitra) Swallowtail (black form). Per the Kaufman butterfly guide, this form found in the eastern part of the Rockies may be the result of past interbreeding with Black Swallowtails. 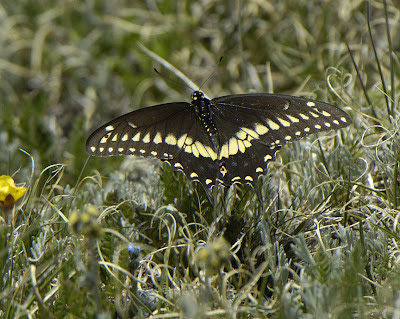 Speaking of which, here's a Black Swallowtail. Can't tell from this pic but it was distinctly bigger than the Anise Swallowtail. 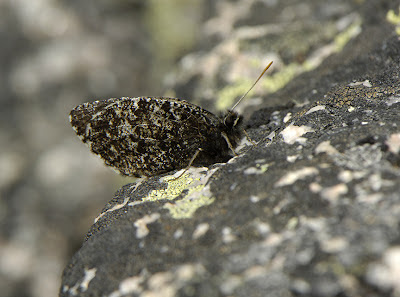 Melissa Arctic. I love these harsh environment loving, cryptic butterflies. It takes these butterflies two years to mature in the short summer seasons found above timberline- they overwinter as first-stage caterpillars. 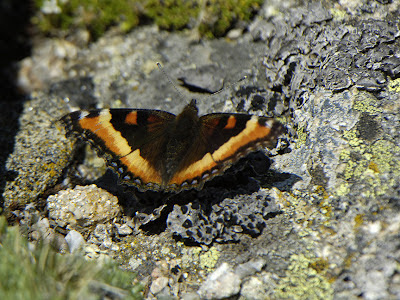 Milbert's Tortoiseshell. Flashy above, dull below! 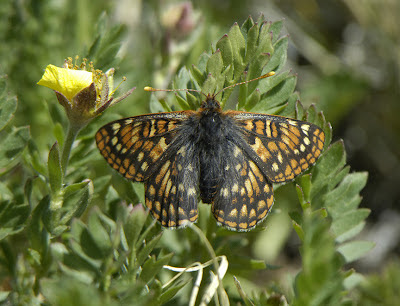 Variable Checkerspot. Great splashes of color on the tundra- unlike many others, their underwings are brightly colored, too.