Faces in the Crowd

I headed over to a local birding hotspot in southern Boulder County, Colorado the other day to follow up on some reports of interesting geese. Pulling in to Stearns Lake with tasty late afternoon light, I immediately saw that I'd be able to burn lots of 1's and 0's on my memory cards. I toted my DSLR rig but also got set up to digiscope, as the geese out on the lake were mostly out of telephoto reach (at least for detailed photos.) One notable exception, though, was this white-morph Snow Goose, which for a while was about the closest bird to shore. Gotta photograph something that bright! 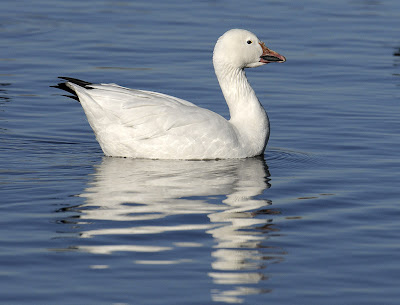 I then scanned a sleeping bunch of geese on some fairly close residual ice, finding two with white heads and dark bodies. One obligingly woke up and looked around- a dark-morph Snow Goose (aka Blue Goose.) Sharp bird- after churning around for a while looking for accomplices it headed east, presumably to feed in nearby corn fields. 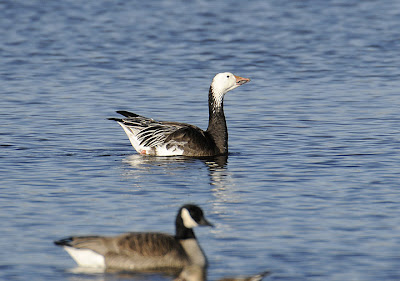 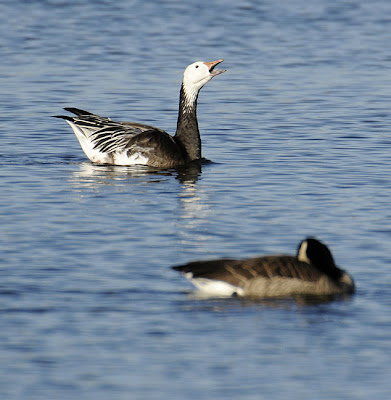 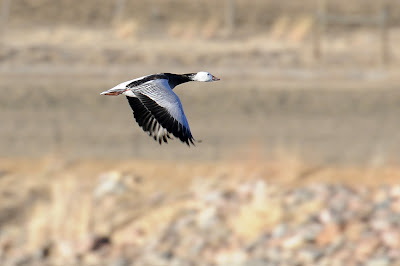 Interestingly, the two Snow Geese were about the biggest geese on the lake- almost all of the white-cheeked geese present (a few thousand) were lesser Canada Geese (parvipes subspecies) or Richardson's Cackling Geese (hutchinsii subspecies.) Mainly, though, I was interested in studying and photographing birds that had been reported as possible dark-morph Ross's Geese (a very rare form, one I've never seen.) The other white-headed, dark bodied ice sleeper soon awoke and began swimming, clearly one of the birds of interest. I digiscoped a bunch of snaps and got a flight sequence on the ol' DSLR when it shuttled towards the main crowd of wee white-cheekers, where it soon immersed itself. 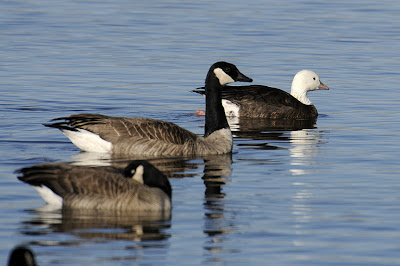 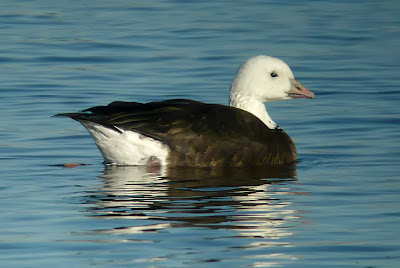 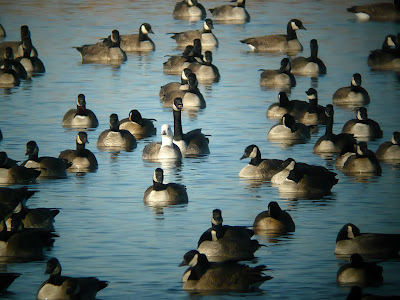 I immediately saw why it was a noteworthy bird, but as others had noted, it didn't quite fit the (few) illustrations, photos, and descriptions available for a dark-morph Ross's Goose. Neat looking bird, but danged confusing. As if that wasn't enough, there was another similar bird on the lake, but with a gray bill instead of the pink (indicative of an immature bird.) The bill shape on this one was a bit more Snow Goose like, but the bird is tiny, the size of a Cackling Goose or perhaps even a bit smaller. 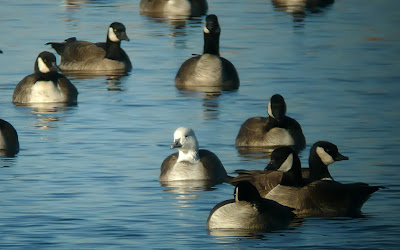 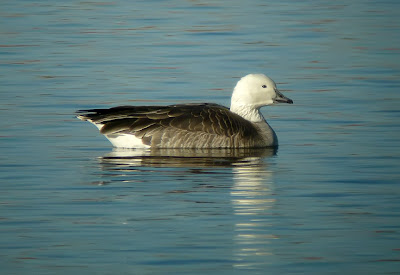 And there was one more immature bird present with a more gray face, looking a bit like a juvenile Blue Goose but again too small for even lesser Snow Goose. 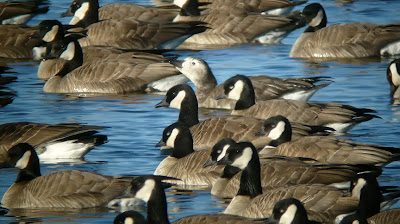 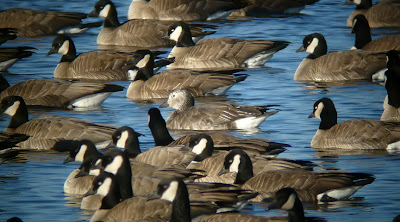 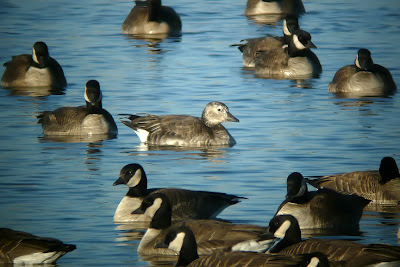 Unsure of what to call these, I sent photos to some waterfowl ID pros who concurred none were clean Ross's Goose, instead probably hybrids (with Ross's x Cackling Goose high on the suspicion list for the adult bird.) Waterfowl expert Steve Mlodinow of the Puget Sound Bird Observatory offered these comments, comparing similar goofy birds he's observed in Washington:

These birds remind me of a series of birds that appeared in se. WA (and one in sw. WA). Ours were all adults, and all had this very dark body, darker than any white-cheeked goose, much like your adult. Head patterns varied, were all something between a Snow or Blue and a Canada. Size was similar to a parvipes. Bill kind of in-between Snow and Lesser Canada. In other words, they looked like your adult, but yours looks more like it has Ross's and Cackling as parents.

And the imms are even more confusing, because the bills seem to look like they have Snow Goose in 'em, not Ross's, but the birds seem too small to have Snow Goose as a parent. In any case, none of these are blue morph Ross's, nor are they some dwarf Lesser Snow. The head and bill would argue that they couldn't be an aberrantly plumaged Richardson's. At first blush, it seems almost inconceivable that the adult is not part Richy and part Ross's, but then how does one get the super dark body plumage. Then one would have to postulate a BLUE MORPH Ross's x Richardson's, which starts to seem increasingly improbable. But if it waa a blue morph Ross's x Richardsons, then how does the head and neck get to be so white.

If he was a bit stymied, then I don't feel so bad for being confused by these birds, too. Steve surmised:

The answer, in the end, to this brand of oddity is likely to be had in an aviary... we need to find someone who has a blue morph Snow x white-cheeked Goose and see what they look like and the variation therein. Particularly a heterozygote Blue morph x white-cheeked might produce some of these odd features. In your case, it would likely have to be a heterozygote Ross's x white cheeked. Or then you wonder, could this be one of those odd birds with more than two species genes involved. It happens in captivity, but I don't know if it happens in the wild.

I agree with Steve that none of these birds are blue ROGO. The last one certainly looks a lot like an imm SNGO, but smaller than CACG??? I think that most of us believe that F1 hybrids have to have some combination of parental traits and intermediate traits, but if one looks at dabbler hybrids, we can see that most F1 male hybrids have some patch of white/pale on the head that is not expressed in either parental species. Perhaps, hybrid geese do similar things. Of course, white head and neck could be a dominant gene expressed in such hybrids, too. The adult is certainly somewhat ROGO-like, but, possibly, SNGO x CACG could account for its parentage. However, the bit of blue at the base of the bill (but not nearly as much as is typical of adult ROGO) does suggest ROGO genes (though I don't see much expression of the usual tubercles on the bill of that taxon).

So what's going on here? Any one of these would be a head-scratcher, but three such birds at the same spot? I guess the two juvs could be from the same clutch but what about the adult?
And none of the three were associating with each other within the large flock- you'd think if they got there together they'd stick together. Anyone know a waterfowl breeder who may have combos that look like these?

One more odd bird was at least a lot easier to explain- a leucistic Canada Goose. Interesting that the neck and head pigmentation is normal while the body is "dilute", although I've seen other similarly differentiated geese where the head was normal but body abnormal, or visa-versa. 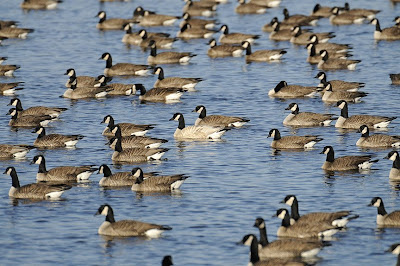 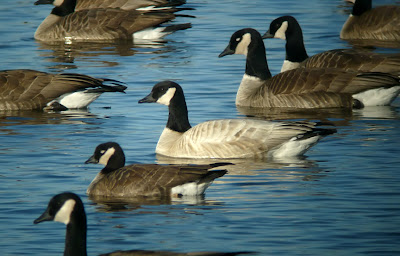 This is a great learning experience. I agree it's especially odd none of these weirdly similar birds are associating with each other--it seems to rule out a family group. Based on ranges, I'd say Ross's X 'Richardson' Cackling Goose make the most plausible parental combination, assuming these are wild-bred, as opposed to captive-bred birds. However, all bets are off once you open the latter can of worms! I will say the fact these birds are associating with definite Arctic breeders (parvipes & Cacklers) does show some negative evidence in favour of wild bred birds. Thanks for this photo essay!

Que paso? Great post, with lots to chew on and super photos as always. I'm always psyched when BrdPics pops up as "updated" in Google Reader.

Seems like there's a rash of these "white X white-cheeked" looking birds around. Or maybe it's just more people are sharing photos. Anyway, these are very cool.

Thanks! We learned a lot! Always pays to check out the odd duck.