A Tale of Two Grebes

A staple of my fall birding activities is scoping area reservoirs for interesting waterfowl, waterbirds, and gulls. As I was waiting out a Parasitic Jaeger between bouts of chasing gulls the other day it occurred to me how different fall Podiceps grebes showing non-breeding plumage are in comparison to their showy breeding plumages. When they are colorful, there's no mistaking Colorado's two abundant fall Podiceps, Eared and Horned Grebes. But when they are wearing their winter grays, they are amazingly similar in appearance and all to often just glanced over. Some of the best advice I've ever received about finding rare birds is to identify every bird, even the common ones. When you are competent and confident with the common ones, unusual birds (in this case, say, a basic Red-necked Grebe) will jump out at you instead of staying lost in the crowd. 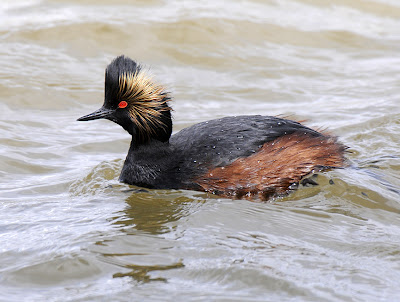 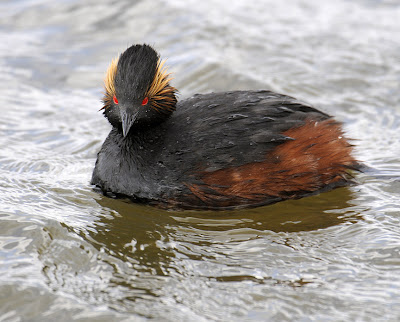 Breeding Eared Grebes (above, Colorado, April) have all black necks and wispy yellow plumes that radiate out from the eye area. Note how dark feathers can be seen through the plumes, and the sharp crest atop the head. Breeding Horned Grebes (below, North Dakota, June) have a solid yellow swipe of feathers going back from the eye, a flatter head, a rufous neck, and a little white tip to the bill. No problemo, you say? 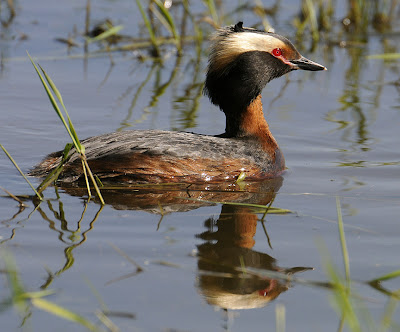 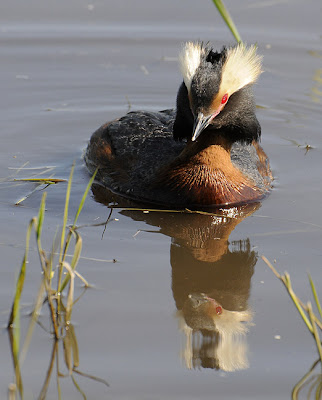 The problemo is that these birds now show a very similar pallate of white, gray, and black in about all the same places when in non-breeding (basic) plumage. Structure can still be helpful, as Eared Grebes (below, Colorado, November) typically show a more domed head than Horned. Note also the blurry-looking border between the dark cap and the light neck. Also note that darkness extends behind and below the eye (feathers known as auriculars.) Eared Grebes are often willing to forage near the edge of lakes, particularly along rocky shores. They can also be seen far from shore, though. 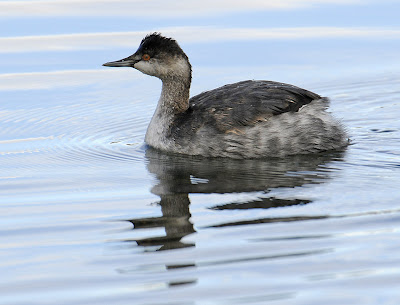 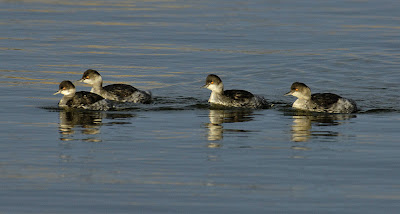 In contrast, winter Horned Grebes (below, Colorado, November) have a more sharply defined dark cap and the eye is right at the edge of the darkness, with white below and behind in the auriculars. Their heads almost always look flatter than Eared Grebes', and most of the time there is a white spot on the lores (feathers in front of the eyes.) If you get a good enough look, you will see that the white bill tip is retained in the winter. To me they look somewhat like dwarf Western Grebes in their basic plumage. It occurs to me like seeing Horned Grebes near shore is much rarer than with Eared Grebes. 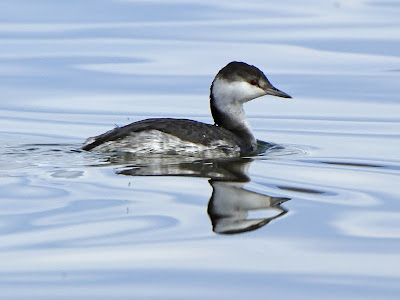 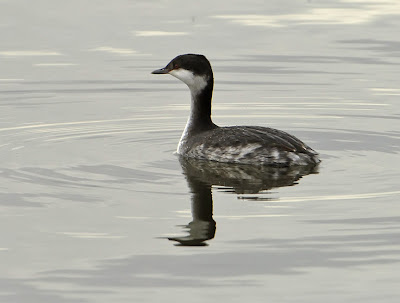 Ready for your quiz? Which is which below?

Scroll down for the answer...


The left bird is a Horned Grebe while the right bird is an Eared Grebe- how'd you do??
Posted by brdpics at 1:59 PM

An excellent post, Bill. I generally only get to see the winter plumage down here in NM, but both species do make an appearance, though not regularly. Now, with your assistance, I'm ready for 'em!

One of the first things I look at on Eared/Horned Grebes when I see them is head shape. The Eared is pointed on top and the Horned is not. I can practically identify them with just that one feature. Of course there are other things to look at as well (plumage) and the head shape should not be the only thing you go by but it is helpful in distant birds.

Bill,
How's it going?? Congrats on the Nikon gig. I linked your blog from mine, I hope that is ok. Let me know.

This post was incredibly helpful. I have trouble with these two grebes. Thanks!