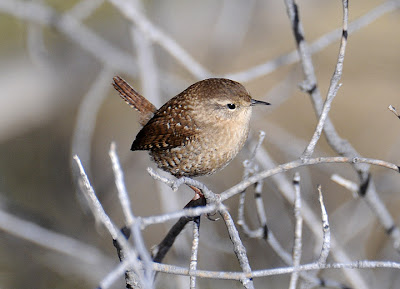 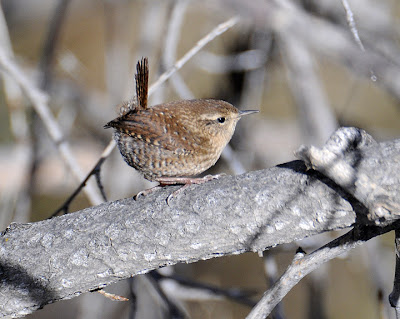 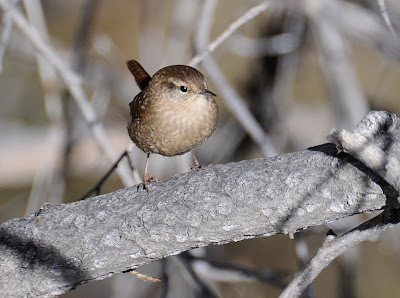 This past Thanksgiving day my buddy Ted Floyd found a Winter Wren along the mighty St. Vrain River ("mighty" and "river" to be taken with a grain of salt) where 63rd St. crosses it near Hygiene, Colorado. Always a rarity 'round here, extra interest in these birds in the state has recently developed as a split between Western (now Pacific) and Eastern birds is said to be a done deal. Ted thought the bird sounded great for Pacific, and I've learned to trust Ted where bird vocalizations are concerned. Confusing the matter, though, were later observations of an Eastern-looking &/or sounding bird there along with more Pacific Wren reports. One observer reported seeing two wrens on 29 December, probably explaining any discrepancies. 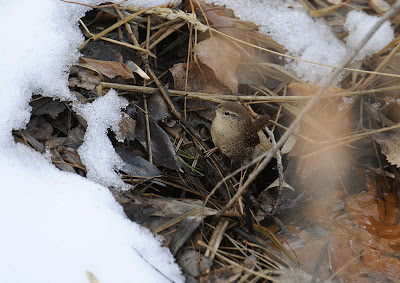 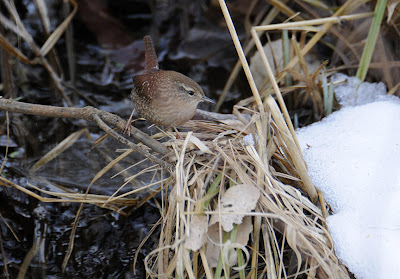 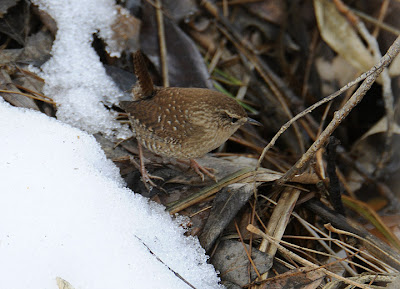 I was clear of the fray in New Mexico when the initial sightings were reported and missed the bird(s) last weekend when I finally tried for them. Today, however, I was cruising by and thought I'd try again. This time I heard a calling wren shortly after arrival, and a bit after that I saw it working its way along towards me. There is a little side stream coming in though a grating on the west side upstream of the bridge, which braids through a mini-delta 10 or 15 meters long before joining the St. Vrain. This appears to be warm water, perhaps spring fed, keeping green vegetation and a good micro-habitat free of ice despite the bitterly cold weather and snows of last week (I saw a Wilson's Snipe probing around in there when I unsuccessfully looked for the wren a week ago.) The wren worked itself along these tiny channels, disappearing for minutes at a time in clumps of grass or small shrubby vegetation. Eventually it was almost right below me as I peered down from the bridge. I was lucky to photograph it nabbing some insect (a torpid fly by the looks of it) from a nearby cottonwood sapling branch. Finally, I whistled an Eastern Screech-Owl song for a bit which got it to temporarily jump up on a sunlit branch and call more intently, lending moral support to an angry Black-capped Chickadee in the canopy before it gave up on the ruse and went back to mucking around in the marshy shade. 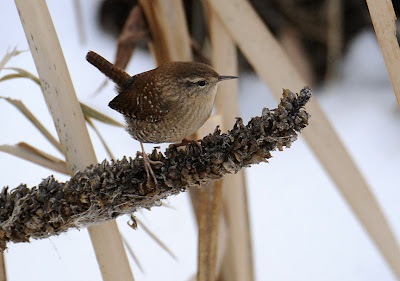 I don't have much experience at all with Winter Wrens, having seen maybe 2 western birds in Washington State and a singing Eastern in Wisconsin, plus a couple birds of unknown subspecies previously here in Colorado. I thought the call notes of this bird sounded good for Pacific, using references such as the call tracks of Eastern and Western (Pacific) Winter Wrens on BirdsEye and on Nathan Pieplow's excellent Earbirding blog post regarding Pacific vs. Eastern Wren calls. I'm worried, though, that it doesn't quite look right to me for a slam-dunk Pacific based on the illustrations and photos I could find. In my opinion it looks a little darker & richly colored overall than the typical Eastern (hiemalis group) Winter Wren but has more white spotting on the back than I'd like to see for Pacific, along with a bit more throat contrast than would make me happy. Still, In Pyle's Identification Guide to North American Birds (basically the bird banders' bible), he comments about geographic variation: "Weak to moderate differences are obscured by broad intergradation and individual variation." 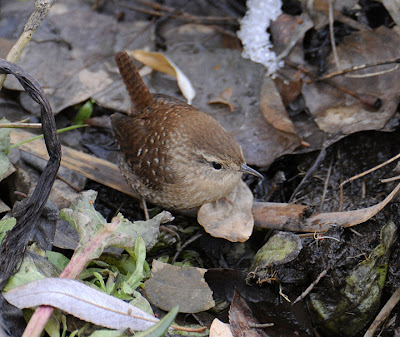 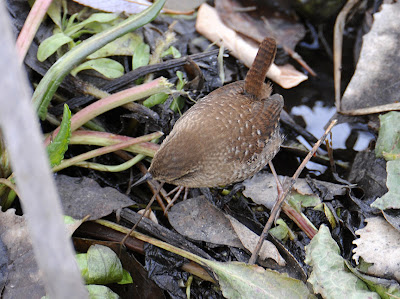 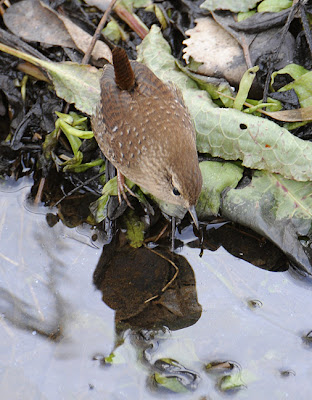 So this brings me to my point- I'd love comments from folks familiar with Winter Wren subspecies as to what they think of this bird. Thanks! -Bill 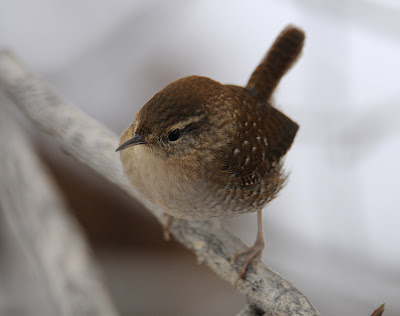 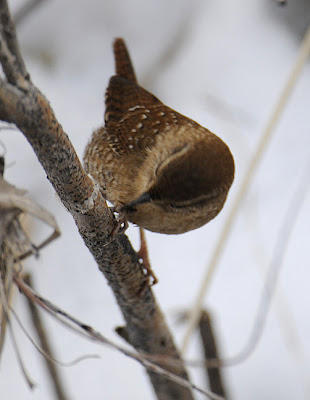 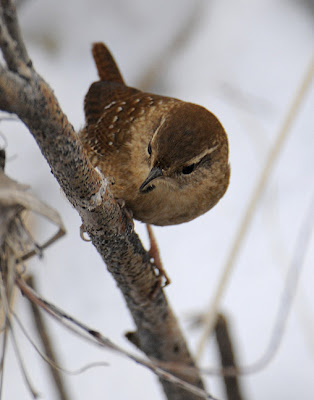 that´s a nice bird. Very good images also. We have, as far as I know, 1 of them in Sweden. So hard to spot and photograph.

Well I've seen quite a few Pacific WIWRs, but can count the number of Eastern birds Ive seen on one hand....this one seems substantially paler than the ones I'm acquainted with here on the west coast. Just my two cents!

Like Seagull Steve, I've seen many Pacific WIWR but very few Easterns. To me your bird looks like an eastern because of the pale grayish throat and the white spotting extending from the scapulars/wing coverts onto the back. One example of a Pacific from Utah (among many better shots out there, for sure) is on my blog here. Note the reddish-brown throat and the lack of spotting on the back on this Pacific bird. Oh, and ignore the partial albinism! I hope that helps. Love your blog.