Any birder has tools that they would consider critical, like their binocular, scope, field guide, map with details of back roads, etc. I'd like to propose another tool that no 21st-century birder should be without-- Google Earth. A free download (http://earth.google.com/), this software lets you virtually explore the Earth's surface at up to 1-meter resolution from your computer. So beyond the gee-whiz possibilities, why is this a great birding tool? Here are some applications I've used it for in the last several months. Anybody else have a great way to use Google Earth for birding? If so, leave a comment.

1) Giving directions to other birders. Once you've been birding, especially in off-the-beaten-track areas, and you are trying to explain to somebody where that great bird or birding habitat was, Google Earth is worth more than the proverbial 1000 words. You just find the spot you were birding, create a place mark, save it at a .KMZ or .KML file (I'll admit I don't know the difference between these two but they both seem to work), and email it to whomever needs it. They open the file, which takes them to the spot in their own Google Earth window. In a variation on this theme, I helped some out-of state birders this past summer who called me for directions to a spot where Mike Freiberg and I found with a good bug- Theano Alpine. I made a place mark, jotted down its lat/long coordinates, and phoned them along to the visitors. They punched the digits into their GPS and followed them right to the meadow hosting these Colorado specialty butterflies.

2) Planning trips. Of course, sometimes you are on the receiving end of directions, either given to you directly or by trying to glean them from a list serve, birding guide, or whatever. Google Earth lets you virtually fly there and check out the lay of the land, generate GPS coordinates or driving directions from where you are, etc. before you head out.

3) Documentation. What do I mean by this? When documenting a bird's location, several details are often requested like the exact location, elevation, and distance to the bird. This used to take some time to and several references to figure out. Now I can just find where the bird was and where I was seeing the bird from, mark both, and get all of the info I need within the Google Earth window. (There is a ruler feature, and you can show the lat/long and elevation of your cursor position in the bottom of the window.) The ruler can also be used to connect points into a path if you are curious to see how far you walked, drove, or whatever. You can also send yourself a screen capture if you want to include a picture of where the bird was.

4) Locate borders. Into county/state listing but not sure where which side of the line you were ticking those birds in? Google Earth has a layer that shows these borders.

5) Explore a birding area. Ever wonder about the layout of a patch of woods, ponder the geography of a migrant trap, or wanted to see what's behind those "No Trespassing" signs? Google Earth lets you do this from whatever elevation, compass orientation, or viewing angle you want. It is almost like having a helicopter at your disposal without the big rental bill.

6) Set a Christmas Count circle. Mark Peterson turned me on to a really easy way to lay out a Christmas Count (or check existing count circles that were probably drawn with a compass on a map.) Following the easy directions at Bootstrap Analysis, you just set the center of your circle, get the lat/long coordinates in decimal form, and follow the links to set your 7.5 mile radius and generate the .KML file with your circle. Opening the file takes you to your count circle in Google Earth. This is extremely accurate & cool! Here's an example using the Boulder, Colorado CBC. In the first screen shot, you can see the dimensions of the whole circle. 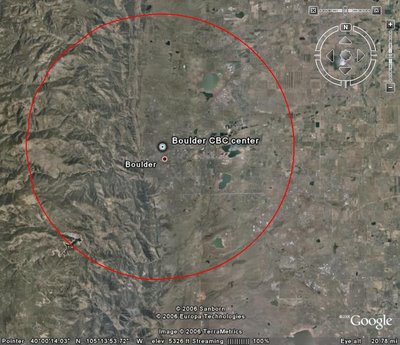 Zooming in to the SW corner, you can see exactly which parts of Gross Reservoir are in or out of the count circle. 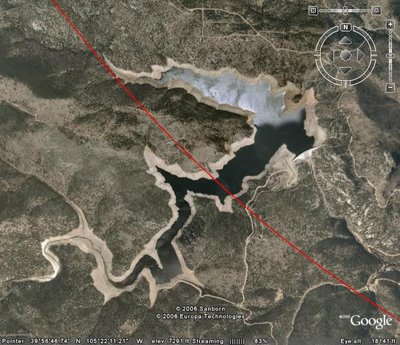 So if that King Eider is hanging out beyond the circle you'll know not to count it. In the third screen shot, we still see Gross Reservoir, but from a different orientation and angle. We can see that the hilltop in the foreground is in the circle, so if a Gyrfalcon perched on a tree up there it would be emminently countable (barring jesses or a white-morph bird, but that's another story...) 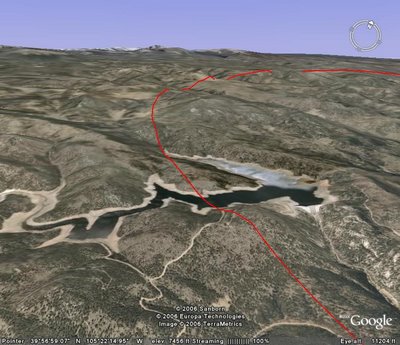 If you want to play with this, download the Boulder CBC circle .KMZ file here.

7) Other bird monitoring applications. While I haven't done it yet, I'm sure I could also plot out my BBS route, bird monitoring transects, or upcoming Breeding Bird Atlas work using Google Earth. (In fact, I probably will!) -Bill

It's also excellent for creating new sites in eBird: just find it in Google Earth, copy the decimal lat/long, and you're there, all without having to fuss with eBird's mapping tool.

Since many of the birding listservs do not allow attachments, have you figured out a way to send a link without it being an attachment. A URL perhaps. I couldn't find a way this morning

Hey Steve- I think the easiest way is indeed to send along the URL. One way to get it is to right click on the link to an attachment, select "copy link location", and then paste it into an email. Best- Bill

I like your idea, anonymous, of using GE to get the lat/long of a location to plug into eBird. That is kind of a weak link for now in their program, but I have it on good authority that an upgrade is in the works, perhaps in conjunction with Google Maps/Earth???