The generous folks at Wingscapes sent me their BirdCam, a motion-activated camera with very close focus capability designed for remote bird (or other wildlife) photography. Great idea and very neat tool- I can see why the Camera Trap Codger likes this kind of work! Thanks, Wingscapes!!

So I've tried a few placements, getting the most action on one of my tray feeders where I rigged up a mount using a flagpole bracket, some 1" oak dowel, and a surplus 5/8" pipe I found in my garage, plus an adjustable studio lighting bracket and a cheapo Bogen head I sprung for at Mike's Camera. I'll probably put something up showing the rig, but for now I don't have any pics of it.

There's a neat feeling to getting home after working all day and seeing the frame counter at 1200-some pics. I'm still fiddling with the number of shots per event, the time between events, etc., but I'd rather pitch lots of duplicates than miss something interesting. And with birds, there's always something interesting, isn't there?

One thing I found out is that we've had our first Dark-eyed Junco of the season, even though I've failed to see or hear it myself yet. 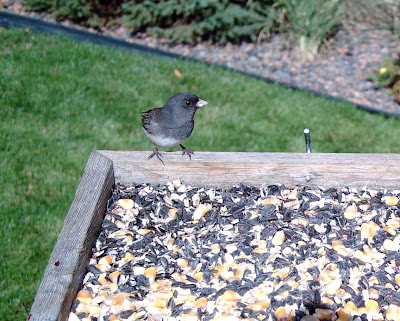 We're also experiencing a major irruption of Mountain Chickadees out onto the plains of Colorado this year, and my Longmont back yard has had a troupe for a bit over a week now. I'd say this is going to be a great winter to find this species throughout the plains states. One got caught in the camera's eye prior to nabbing a sunflower seed: 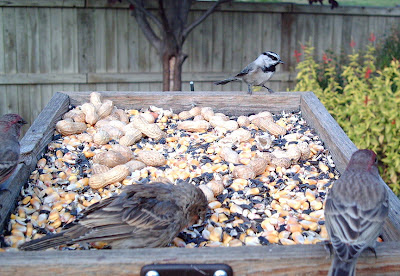 Blue Jays are always entertaining. Check out the second shot- dude, Iowa called and said not to worry- there's plenty more corn where that came from! 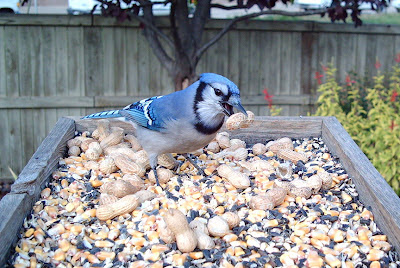 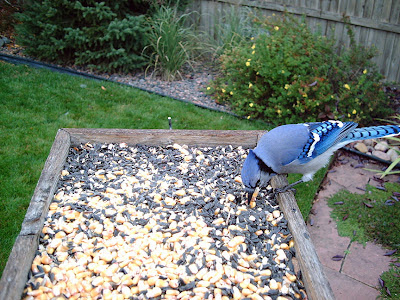 One of the addicting things about this kind of set-up is you never know what might be in the next frame. After rapidly viewing & trashing hundreds of shots of my House (Finch & Sparrow) mob, this frame startled an expletive right out of me! 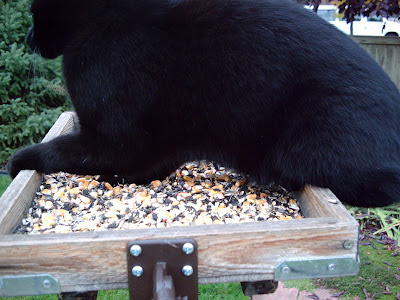 Anyway, one thing I began to enjoy was the variety of Common Grackle shots I got. I know they can be overwhelming at feeders, but they are gorgeous native birds and won't be around these parts for much longer before they head south for the cold months. They are ravenous in their final days or weeks before migration and come in droves, but that also ups the chance for something unexpected. For example, one of the grackles sported a band. I tried to read the number but couldn't resolve it. 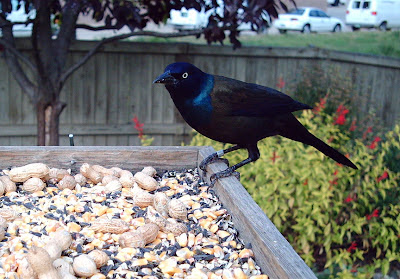 This one only had one eye- arghhh, bring along me eye patch, matey! 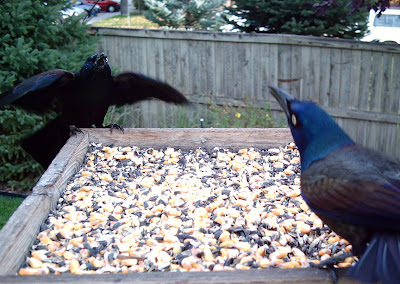 Grackles as a whole have a high incidence of partial albinism, and I had a few showing varying degrees of plumage anomaly. Sometimes the only unusual thing is a few tiny white feathers flecking the head, like the bird on the back right corner has: 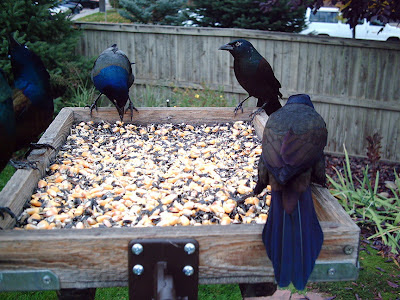 This next bird had more extensive white feathering around its eyes, and the base of its bill lacked pigment, too. 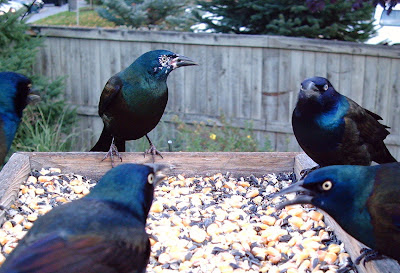 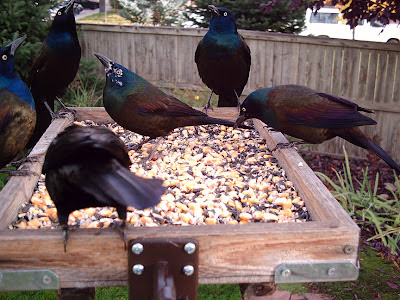 And then this one showed up today, with an almost white head. I've seen this pattern in Canada Geese, too, where all of the body and wing feather tracts were normal, but the head and neck were mostly white. 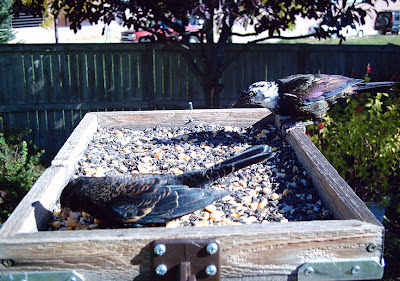 Finally, there's this Common Grackle, which appears to be just plain rude! Makes the saying, "Get off my back!" a little more real for me. (Yeah, in case you were wondering, Eurasian Collared-Doves have arrived in Boulder County.) 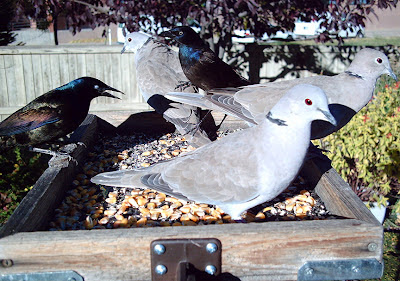 Fun stuff indeed. Thanks again to Wingscapes for sending their BirdCam- I look forward to thinking up some fun camera placements and hope to periodically share the results. For now, time to top off the trays again & see what tomorrow brings. 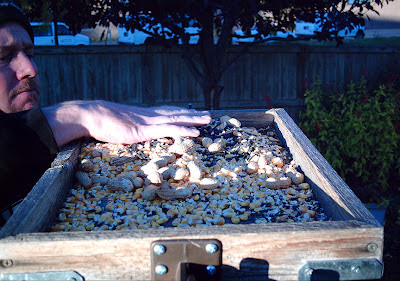 They graciously gave me one too. I'll set it up this weekend. I hope to catch a Purple Finch, RB Nuthatch, or other less common visitor at my feeders.

Such clean, crisp looking photos. Wow! And to think you don't have to be home to get those shots. Thanks for sharing.

As I mention here, I think they're gone for the year, at least in my neighborhood.
http://longmontian.blogspot.com/2007/11/theyre-outta-here.html

neato! I'd love to have one!

I did not know about the albinism in grackles. They were a real nuisance when I lived in Texas, but up here in Central PA they're not as common. They do tend to hog up all the seed at the feeders, but I figure everyone's gotta eat. I never noticed any white on the grackles here, but I'll be sure to check in spring when they come back.

Anonymous said...
This comment has been removed by a blog administrator.
6:28 AM