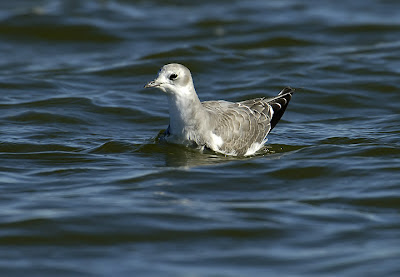 We're having a strong showing of Sabine's Gulls along the Front Range of Colorado this fall- many area lakes have had singles or multiples, including a high count of 9(!) at Boulder Reservoir last week. I've had my share in the bins &/or scope, but generally they like big water and are seen flying or feeding at a distance. My luck changed last Sunday, however, when I found a pair of juveniles feeding at Lagerman Reservoir, about 5 minutes west of my house in Longmont. As soon as I pulled up I saw one wheeling along the dam, flashing the unmistakable "M" pattern on its back. The find was serendipitous- I was going to make the longer trek to Boulder Reservoir, which is a large, enigmatic lake. Some days you would swear that it has a bird-proof force field around it, despite being a substantial body of water by Colorado standards. But other days it can turn up real gems- this fall, for example, it has had Red Phalarope and Long-tailed Jaeger in addition to the hordes of Sabine's Gulls. But I remembered that the Boulder Marathon was going on at The Res that day, and last year I got caught in traffic trying to get in and out the only access road, spending at least half an hour in a traffic jam. Not how I want to spend birding time, so I nixed that run in favor of Lagerman. 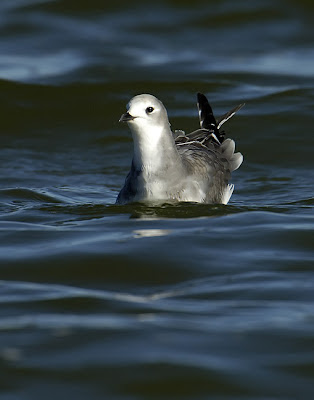 The two SAGUs would cycle really close to the dam and the north shore before working back out farther. I would get set up and they would come in close, but the lighting was terrible, totally backlighting the birds in nasty glare. I gave chumming a try, walking to the more light-favorable south shore and pitching out some buttered popcorn to see if they would cross the lake and get some sun on their face. While lots of ringers and a few Franklin's Gulls quickly gathered, the Sabine's Gulls couldn't be bothered to see what their fellow larids were up to. So it became a waiting game... Farther west along the north shore there is a boat ramp and floating dock projecting out 10 meters or so into the lake. The pair finally began working west along the north shore, and I out-flanked them, hunkered down on the end of the dock, and waited for them to come along into photo range, now with the sun at my back or at least at a nice side-lighting angle. A fisherman almost blew the deal by shooing them away as they crossed near his lines, but it actually got me a nice flight shot that I probably would have missed without his unwitting assistance. 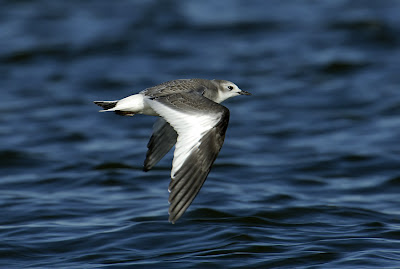 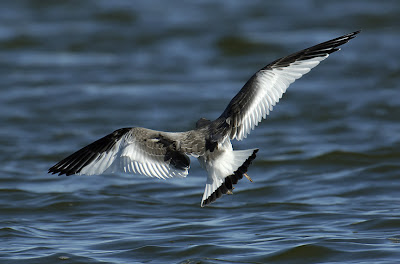 They landed and continued their approach, and I finally got some killer shots of this species about 3 hours after I began trying to get position on these birds. I also shot some herky jerky video which really shows how phalarope-like these birds are when they are feeding from the surface. But keep an open mind and sharp eye- the afore-mentioned Long-tailed Jaeger at Boulder Reservoir was doing the same thing earlier this fall as it fed. OK- this is the first time I've tried uploading video directly to Blogger- it was simple to do but the video lost tons of quality. Looks like a better idea is to compress it in iMovie, upload it to YouTube, and then embed it, but I'm tired and don't feel like all of that work now. So here's the straight-to-Blogger video- even though it got real grainy and lost tons of color saturation, you'll get the idea of how these things move around on the water. Night, night, everyone...