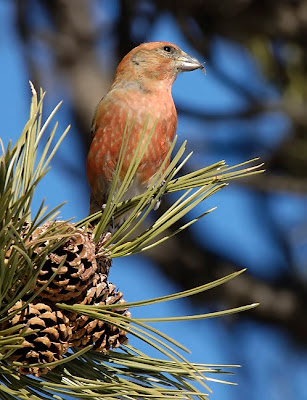 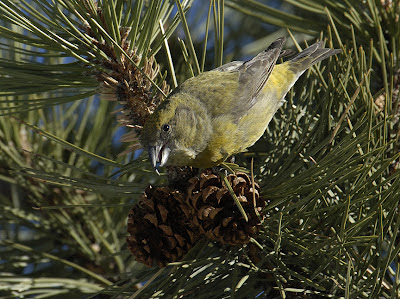 Well, Christmas Bird Count time is upon us, and I've been running around like a madman putting the final touches on the Boulder CBC, which ran successfully last Sunday. I compile the count, and a lot goes into coordinating the 30 territories and all of the feeder watchers. Now I have the other major part of the job left, which is to tally everything up and send it along to National Audubon. I created a big spreadsheet to help, but I still have to hand-enter all of the numbers. Here's my quick summary of the day that I sent to Cobirds, our state birding list serve:

Folks- scores of birders fanned out across the Boulder CBC circle on its 66th running today, spanning habitats including high foothills, urban jungles, riparian corridors, and eastern plains. Some met with strong winds and all had solid snow cover under blue sunny skies today, and open water was at a premium. (My group got passed by about 4 groups of snowshoers while looping around Betasso Open Space west of Boulder.) About the only calm water still uncapped by ice was at the Valmont Reservoir complex, which contributed two new birds to the Boulder count- Mew Gull (previously count week only) and Surf Scoter. (For directions on scoping this restricted property see http://www.coloradocountybirding.com/county/bird_a_county.php?name=Boulder#387.) Many reports are still on the way, but we will certainly have high hundreds or even over a thousand Bohemian Waxwings. Other highlights include Chihuahuan Raven (only seen on one previous count, when still known as White-necked Raven), Lesser Black-backed Gull (2 previous counts), Eared Grebe (3 previous), Gray Jay (6 previous), and with 7 previous counts each, Black-crowned Night-Heron, Peregrine Falcon, and Lesser Goldfinch.
Our day's list currently stands at 108, with two additional count-week species. Our biggest misses for now include Evening Grosbeak and Snow Goose, and we only have Merlin as a count-week bird. Hopefully a few species will be added as the remaining territory and feeder watcher reports are received.
I'd like to thank all of the territory leaders, participants, and feeder watchers for their efforts- I hope everyone was as invigorated by the brisk air, snow, and blue skies as I was! Let me know if you think you have a goodie from today in the Boulder Area (Northern Pygmy-Owl or any Bluebirds, anyone??) or in the next three days of count week.
Thanks again & have fun out there on all of the remaining counts! 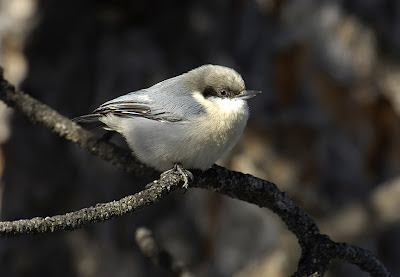 I also did the Loveland, Colorado count on Saturday- among the highlights was a flock of over 500 Bohemian Waxwings! I'm also heading out east to do the Bonny, Colorado count on Friday. Busy boy, I am (especially with this other thing called my job going on in the meantime...) 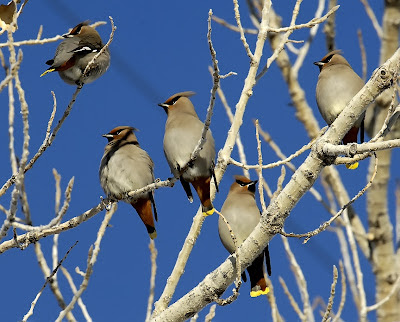 So, I'll leave you with a little Christmas Count ditty, penned by Colorado birding legend Bill Prather- thanks for letting me post this, Bill!!

Would you please tell me the identification of the bird above the Bohemian Waxwings photo? I have a simular looking bird in my feeder in Michigan. The shape is simular but the color is a darker grey with a white underbelly and I don't see and wing stripes or markings.
Thanks,
rae

Hi Rae- that is a Pygmy Nuthatch above the Bohemians. It would be a pretty unusual bird in Michigan, but they are irrupting out of the mountains somewhat so take a close look. They are tiny- only about the size of a kinglet.

I looked him up and it looks like he might be a Dark-eyed Junco or a Juncohyemalis.
Thanks brdpics
rae