I made a trip up to North Park, Colorado, heading up after work on Thursday to take advantage of a comp day I had on Friday. My main target was Greater Sage-Grouse, but North Park is full of great birding & wildlife viewing opportunities so the day was filled with photo-opps. Despite the great showing of Greater Sage-Grouse, I was hoping for a little better light (Friday Morning dawned with snow flurries), so I stuck around for another go at it Saturday morning. Leaving the hotel at 5:30, I was happy to see the moon and stars in a mostly clear sky- although it had snowed overnight it looked like a sunny morning at the lek. Another problem ended up facing me- a Golden Eagle strafed the grouse about 10 minutes before sunrise, scuttling my hopes of the warm light illuminating their choreography. Still, some of the more testosterone-crazed males came back after a while and I got some shots I liked: 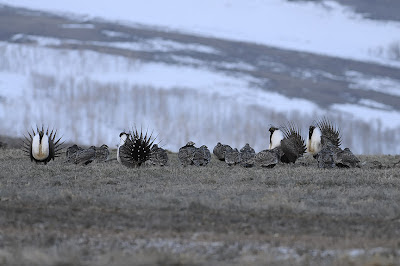 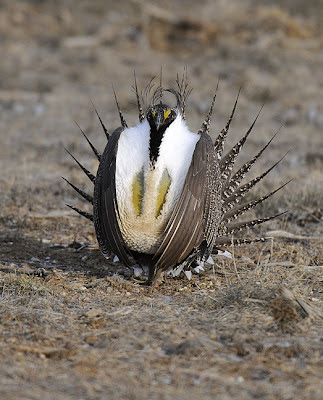 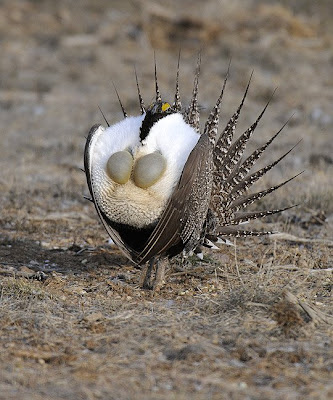 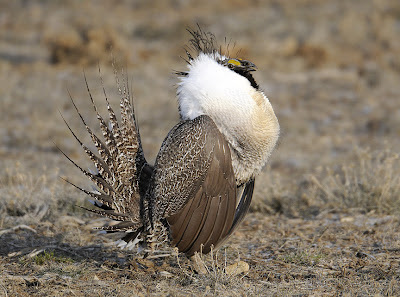 Then, somewhat to my amazement, my cell phone rang. The reason I was a bit surprised was that I didn't have coverage throughout most of the remote landscape (the day before I had to drive to a prominent high spot and park to call home for my daily check-in with the fam.) But by some stroke of luck the spot I was parked in had enough reception for my buddy Nathan to get through to me with news that a Louisiana Waterthrush was being seen in Longmont, at a spot only about 5 minutes from my house. Having got my grouse shots, I decided to pack it in and head home- only a few hours earlier than I would have, anyway. The two passes I had to cross (Willow Creek and Berthoud) were in the midst of solid snow showers, and the going was kind of slow over the snowpacked surface, but things kept moving and about 4 hours later I was pulling up to the waterthrush spot. I was relieved to see my friend Rachel there, waving me down to where a couple of observers had the bird. I'd only seen the species once before, putting together the pieces of a bird in heavy cover on S. Padre Island, Texas. This one was mostly hanging out in a culvert, feeding on rocky gravel bars in the middle of Lefthand Creek and occasionally sallying out to work the banks above and below the bridge where it usually hung out. To photograph the bird (ABA photo tick #575!) in the culvert I had to mount up a flash and use a Better Beamer to reach it, but my favorite shots came as I anticipated the bird's movement back towards the bridge and lay on my belly above a cut bank, catching it on the branches reaching into the stream and on the log. By this morning the bird was gone- glad I got the news and could get there post-haste. 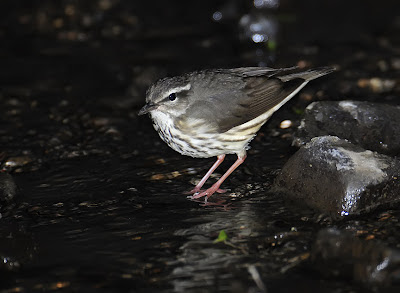 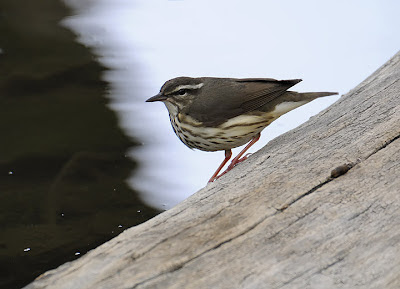 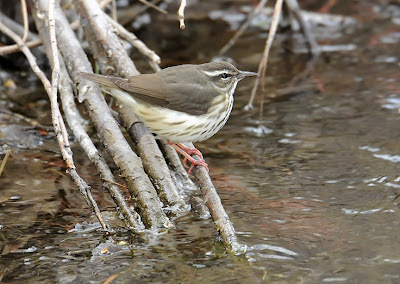 The sage-grouse images are stunning, but my passion is songbirds, and the little thrush is so lovely.

Gorgeous shots all around Bill.

Great photos! I'm terrible at waterthrush identification...so, could you explain to me why this is NOT a Northern?

Anonymous- good question! Waterthrush separation can be tricky, particularly since they often like to lurk in heavy cover. Fortunately, this bird showed well out in the open so the salient field marks and behaviors could be studied well.

The main points that indicate Louisiana are:
- Bright bubble-gum pink legs (vs. duller legs in Northern)
- Eye-line white behind the eye, and stays wide way back onto the nape (Northern often has a tint to the eye-line and it pinches down thinner on the nape)
- Throat mostly unmarked (streaked on Northern)
- Underparts not as densely spotted
- Bill longer than Northern
- Tail-wagging behavior noticeably different- wags its tail as if drawing the letter "U", slower pace than the quick up-down of Northern.

Here's a comparison shot of a Northern Waterthrush:
http://schmoker.org/BirdPics/Photos/Warblers/NOWA15.jpg

Thanks Bill for explaining, now I'm that much better at waterthrush ID! :-)

What a phenomenal day of bird photography. I thought about driving up from COS to look for the waterthrush but thought I would be too late.