Some Lifers are Easier Than Others...

Well, I'm back in one piece from Florida and starting to feel like I'm settling in back at home (the feeling may be complete with the snowfall forecast for tonight...) Even though my head finally hit my pillow at 1:15 am Monday morning, the buzz of new birds in new places kept me from feeling exhausted (sleepy-tired, yes, but wiped-out, no!)

I had never birded central Florida before, so I needed a lot of the specialty birds there. My Florida-based buddy, Jeff Bouton, picked me up in Orlando for a whirlwind day of target birding before we headed up to St. Augustine for the Florida Birding & Fotofest. I ended up with 5 life birds that day, and picked up another one or two (depending on who's list of accepted birds you are looking at) at the festival.

Of course, one bigshot bird there is the Florida Scrub-Jay, the state's only endemic bird species. I was getting nervous because our Scrub-Jay stops were late in the day, and we missed the bird at the first couple of places we tried. Not to worry, though- at Merritt Island NWR, on the aptly-named Scrub Ridge Trail, the birds arrived. The first individual flew in to Jeff's mimicked contact call, giving me my life look and a couple of quick pics before it flew off again. I would have been happy with that, but about 2/3 of the way around the trail a group of 4 or 5 birds came in, apparently expecting handouts. They loitered near us for a while before one, apparently out of patience with our lack of peanuts, landed on my head. Needless to say, I got some acceptable shots of this species (thanks, Jeff, for snapping the bird on my hat!) 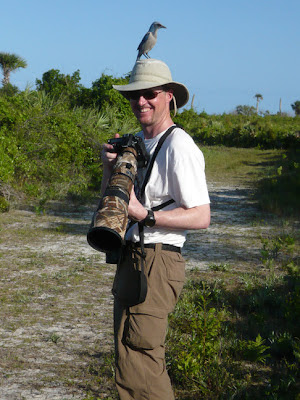 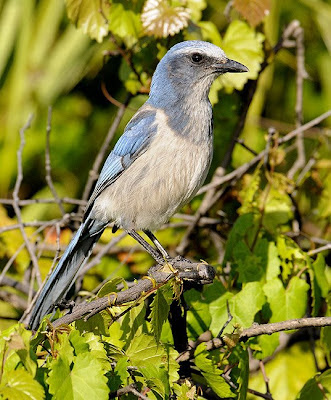 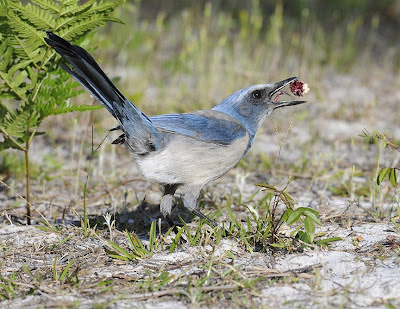 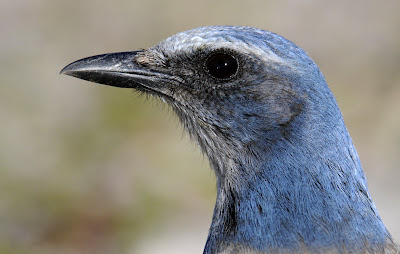 When we were set up at the Leica booth at the festival, Jeff overheard someone talking about a Brown Booby they had seen at the public fishing pier at St. Augustine. Hello- that might be of interest to a lot of out-of-towners!!! So we made the trip, bought our 50-cent tickets to the pier, and went out to greet the bird. Apparently it has been around since at least last November but it hadn't been reported on any Florida lists for a while. Some of the regulars on the pier said it had disappeared for a few months but had been back for a month or so. It is getting handouts on the pier but it can fly and heads out to fish, but is back on its little stretch of railing behind a small white structure every evening. We enticed it away from the distracting building with a discarded scrap of bait squid to get clear shots of it. Thanks again, Jeff, for snapping my portrait- it isn't every day that I get to pose with a lifer! 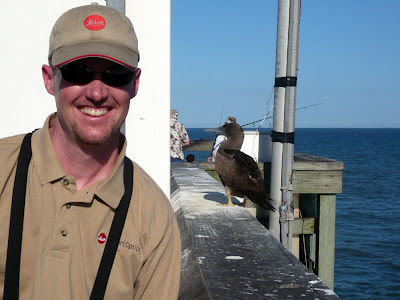 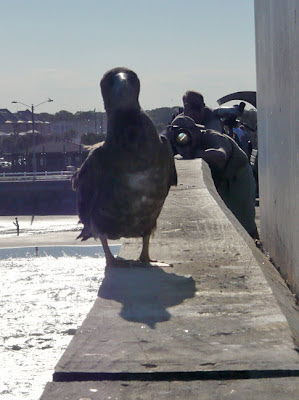 This shot is looking into the sun but you can see me and another photographer down the rail snapping pics of the bird... 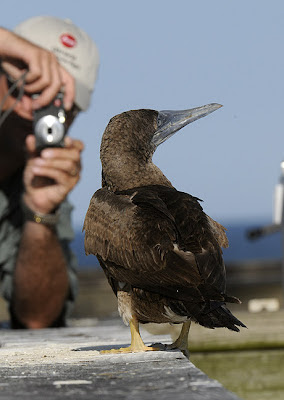 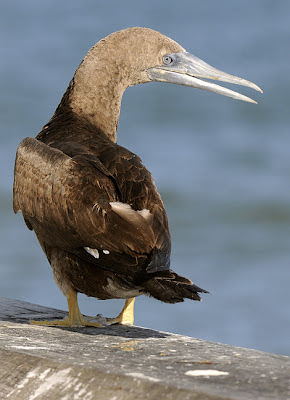 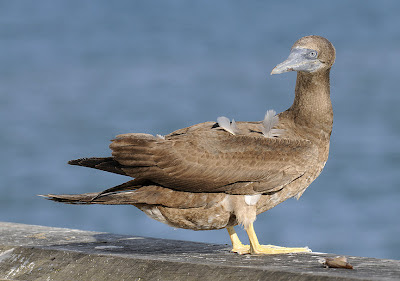 Great pics...love the jay on your head!

Wonderful images. I wish all birds would land on people instead of skulking around in trees and shrubs.....

Those shots are a bit better than acceptable!