The 67th Boulder Christmas Bird Count was held last Sunday, which also happened to be the coldest day of the season so far (with record-setting cold later that night!) I compile the count and was a nervous wreck worrying that we'd get shut down by the weather. The count is traditionally scheduled for the first Sunday of the count period (Dec. 14 - Jan 5) and with 30 territory leaders and usually over 100 participants, the show almost has to go on- there is simply too much inertia once everything is in place to just decide to postpone for a day or even a week (barring, I suppose, the storm of the century or something.) So out we all went, with 4-5 inches of fresh snow and temperatures a few degrees either side of 0. This Townsend's Solitaire kind of sums up the feeling of the day- cold, snowy, but beautiful. 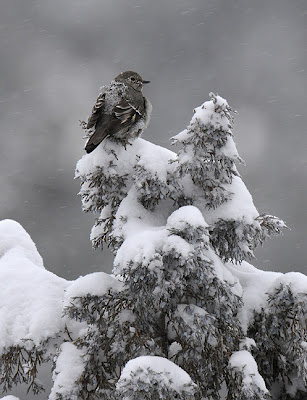 My team of hardy birders (below, from left: Yours Truly, Connie Kogler, Dave Alcock, Mike Freiberg, and Dan Maynard) went up in the Boulder foothills to an open space park called Betasso Preserve. Our second bird of the day also turned out to be our best- a very chilly Brown Thrasher subsisting on Russian Olive berries bordering a horse corral. Beyond that the birding was kind of slow but we had some nice montane species and it was priceless to walk a 3-mile loop in a typically busy mountain park with the only tracks before us in the snow belonging to deer, squirrels, and rabbits. 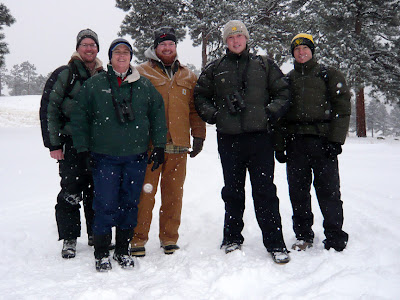 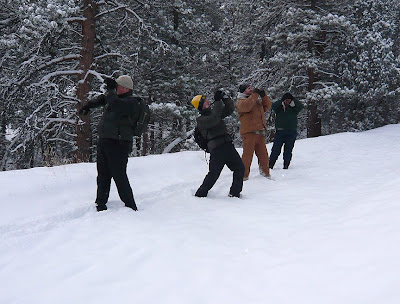 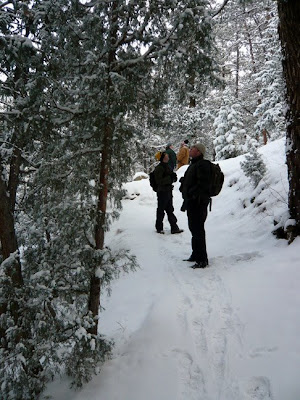 Once we wrapped up in the mountains, we descended to warm up, re-group, and get a bite to eat at The Original Pancake House in Boulder. The host took pity on us and produced a huge complimentary apple pancake to nosh on while waiting for the rest of our orders. 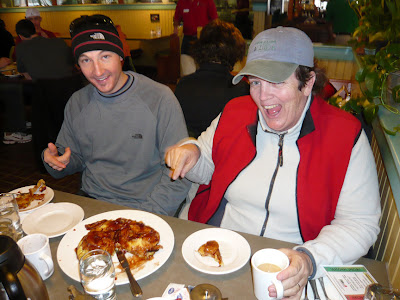 Re-stoked and warmed up, a few of us headed back out to surmount the mesa in the midst of the Valmont Reservoir complex, lakes warmed by a power plant nearby and often chock-full of great birds. Divers like Double-crested Cormorant and Western Grebe overwinter here in small numbers, the only location in the count circle for such species that would normally depart for warmer climes. Unfortunately, the combination of relatively warm water and very cold air (about -5 F by then) produced very foggy conditions. Still, we gave it a go, sometimes glimpsing birds through quick gaps in the fog like a raft of about 75 Red-breasted Mergansers. Earlier in the day, a team had covered the territory from inside the fenced complex (permission and chaperone required from Xcel Energy) but had missed seeing any of the Western Grebes that should have been out in the fog. Fortunately, from our higher vantage we could hear at least one give its kree-kreeee call- tick it! 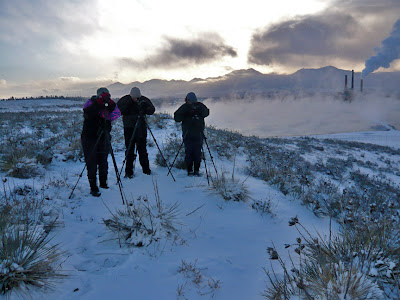 I'd like to thank everyone who braved the cold to participate in the Boulder CBC. We were able to add one new species to the all-time list (bringing it to 206) with a Great Black-backed Gull, and other highlights included Western Bluebird & the aforementioned Brown Thrasher (each the 11th time on count day), Lesser Goldfinch (9th time), Eared Grebe & Hermit Thrush (each for the 5th time), Lesser Black-backed Gull (4th time), and Brown-capped Rosy-Finch (3rd time, complimenting Gray-crowned's 14th appearance.) Next year will be the 100th aniversary of the Boulder count, which was first run on Dec. 24, 1909. It's going to be big so make plans to join us on December 20, 2009! Meanwhile, there's plenty of time to join another count this year- you can find one on Audubon's Find a Count Circle page. 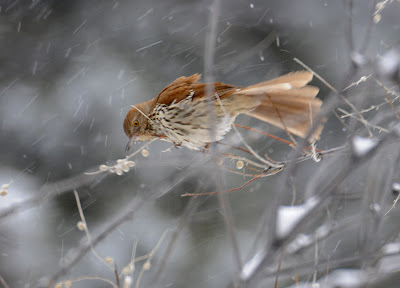