Bill of the Birds uses a name I really like for the Sharp-shinned Hawks that make winter appearances in his yard- Death Rockets. So hoping that BT3 will consider this imitation to be the sincerest form of flattery, I'd like to talk about the Malignant Missile that visited my yard yesterday- a Cooper's Hawk. Like BT3 & Zick, accipiters in my yard are usually Sharpies. When my wife said a hawk was in one of our trees yesterday, I took a peek expecting such a Death Rocket. I immediately sensed that this bird was too big for that. While you can't always rely entirely on size (the largest female Sharpies overlap the smallest male Cooper's in size), if you see an accipiter that looks about crow-sized, Cooper's is the place to start with your ID procedure. (A side note on size- in many settings I would hate to rely on this- without familiar references your impression of size can get thrown way off. For example, in moderate snow today, I saw a raptor on a pole that I was assuming would be a distant Red-tailed Hawk. Putting a scope on it, however, revealed a Prairie Falcon. It was closer than I thought, and the murky conditions totally threw me. In the backyard, however, the accipiters are always at about the same distance and perching on familiar landmarks, so size is trustworthy.) Anyway, picking up bins I could see the more crisp vertical dark streaking on the breast and the smaller-eyed, less "cute" looking head. The tail was also graduated, meaning that the outer tail feathers were shorter than the inner ones- a few don't show this, but most do. Cool- a Coopers! While not the first in our yard, they are seriously outnumbered by Sharpies. (And yeah, I trimmed out that offending little branch today so if I get more shots on that nice horizontal limb they should be a little cleaner.) Looking closely, you'll notice that the inner tail feathers are the bluish-gray of adults. I thought that perhaps it had begun its molt, but Jerry Ligouri and Brian Wheeler let me know that replacement feathers will grow in with adult coloration, and that's the case here- too early to molt but it lost those feathers in some mishap and re-grew them. Also interesting that adult-type tail feathers are a bit shorter than juvenal tail feathers. 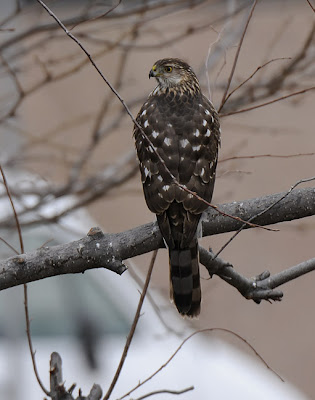 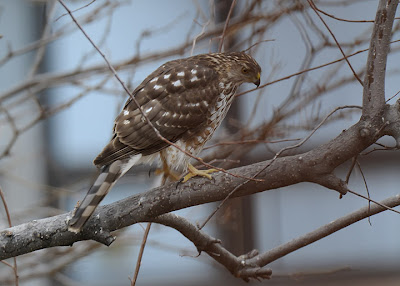 The juv Cooper's was intrigued by three red squirrels foraging under my feeders. It even flew down and landed next to one, which just ignored it (serious stones on the squirell's part, I'd say.) The Coop was twisting its head this way and that, trying to figure out if it should be attacking or not. It even jumped up and down a few times, dancing around the nonplussed squirrel but making no contact. Wish I had a shot of that... A bit later in the day, an American Crow conveniently perched at almost the same spot. Check out the similarity in size between the crow and the Coop: 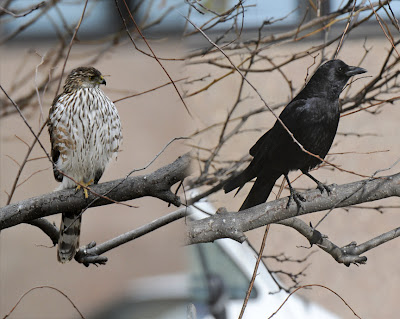 A few hours later (clouds gone by then), an adult Sharp-shinned Hawk was trying its luck on the flock of birds that had retreated into my brush pile and spruce trees. It sat on the fence for a while near where the Coop had earlier, allowing another size comparison: 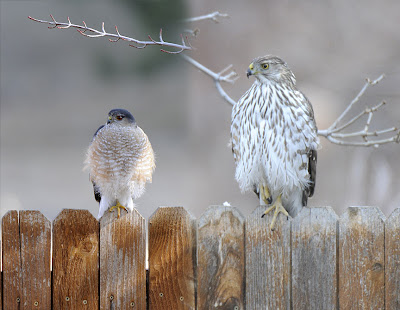 Pretty substantial difference, eh? Makes me suspect a male Sharpie and female Coop. The sharpie stayed around for a while and allowed some pretty close photography- I think it was hoping I'd flush out a bird as it tolerated my slow oblique movements. Looking at my pics, I realize that its middle left toe is broken- ouch! It ain't easy being high on the food chain- accipiters will pursue prey at top speed through heavy cover and must occasionally take a beating. Nothing beats the red eye of an adult accipiter in my book, though- I feel really lucky to have caught this one's in good light and pretty close. 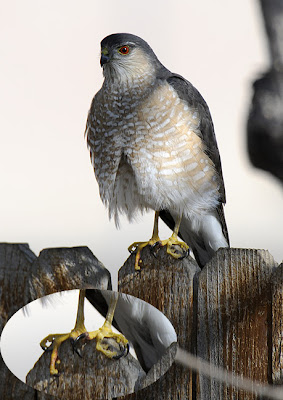 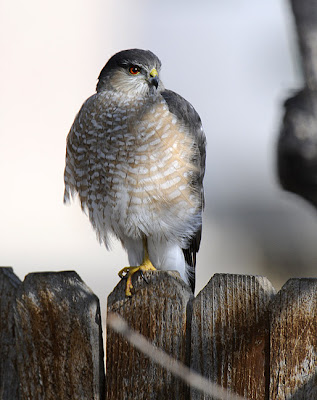 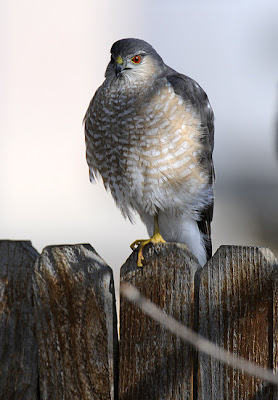 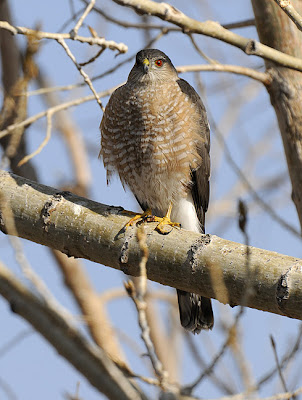 Nice shots, and great to get the comparison photos..