A couple of days ago I found a pleasant phone message waiting for me on my cell after work- a gentleman who had earlier attended a field trip that I co-led had found a swan on a private lake in rural Weld County, Colorado and would I like to go check it out. I had to think about it for about a millisecond but of course, I was game! Swans in Colorado are always interesting, and in mid-winter birding slowdown times it was especially exciting news. 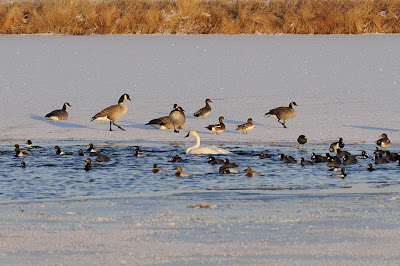 I'll admit I was expecting to see a Trumpeter Swan, which more commonly over-winters around here. But at first glance from a distance, the swan didn't appear to absolutely tower over the nearby Canada Geese. The bird was resting and bathing in a small open patch in the otherwise frozen lake, joined by a multitude of other waterfowl and coots. It was pretty calm about letting us drive pretty close, and when I got a better look in good light I could detect a very small pale spot on the lores. This, along with the size, cemented the ID as a Tundra Swan. 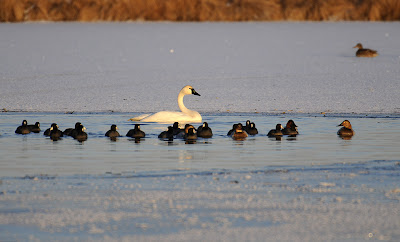 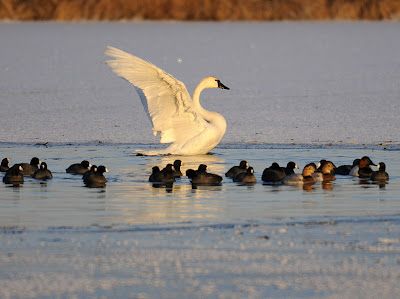 I enjoyed looking for some of the other marks that David Sibley has delineated in his guide and also on a supplemental swan ID page on his website- I highly suggest printing it out and tucking it into your Sibley Guide or keeping it otherwise handy. Note in particular the rounded crown (Trumpeters often have a little peak behind the eye, ala Lesser Scaup), the very narrow lores (the eyes almost look separate from the lores, especially when the bird is looking right at you), and the gently curving border between bill & forehead (a sharper V shape on Trumpeters, but this feature only reliably works on adults.)

The ducks were quick to shuttle over to an adjacent pond, but the cadre of geese that the swan had joined just ambled onto the ice. The swan eventually followed suit, suddenly looking even bigger in comparison as it stood next to them. Still, when you look at some of the Trumpeter Swan pics I have with Canada Geese nearby, you'll see that Tundra Swans aren't nearly as colossal (Tundras average 6.6 kg while Trumpeters average 10.5 kg.) I also enjoyed how the lighting effects changed nearly by the second as the sun set. 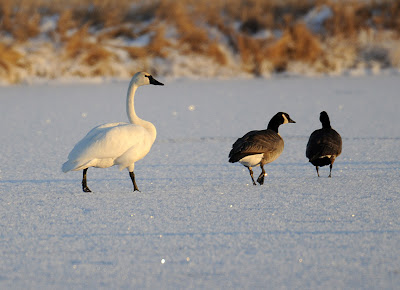 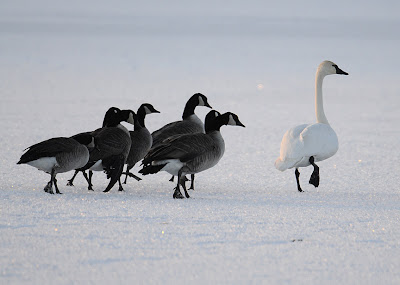 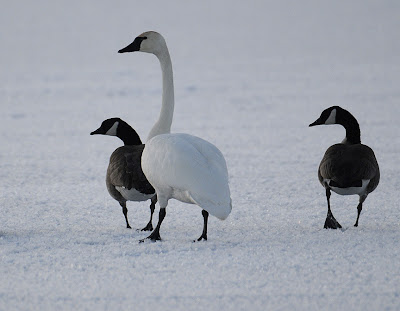 When the sun had fully dipped, the swan flapped back over to its patch of open water, fluid white feather movement against crysaline white snow. There we left it tucking its head in for a sunset snooze. Thanks again for the call and for the escort in to this private birding patch, John! 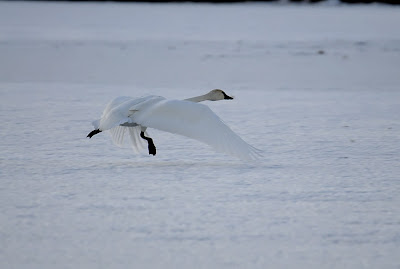 Great post Bill, can see how this one could be a pitfall! Some UK swan action at https://www.blogger.com/comment.g?blogID=36967163&postID=254177748681684230
The bill patterns vary a lot &, as you probably know, the folks who watch the swans at places like Martin Mere can recognise returning individuals by their bill pattern!
BR,Mike