Over the weekend I went to the Dinosaur Ridge Hawkwatch, located near world-famous Red Rocks Park west of Denver. Sadly, the count there has seen a gradual decline in recent years, and this year there is no funding for a permanent hawkwatcher. Still, it is a nice place to hang out, tune up on on raptor ID a bit, and see what else is around in the rocky, scrubby foothills habitat. Plus, you never know what else you'll see up there- we tallied one crunching car wreck below on highway C470 and two paraglider flybys from Lookout Mountain to the north- they hardly ever make it this far down but conditions were right to ride the wind kicking up the ridge from the east that day, I guess. 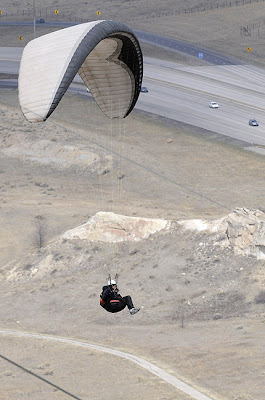 The raptor flight was pretty slow, but nonetheless my dad & I had nice looks at a Cooper's Hawk and a Prairie Falcon in addition to local & migrating Red-tailed Hawks (their status judged by behavior and northerly progress. For example, the local pair will often escort lone migrants along and then turn back. Sometimes they get more aggressive, dropping talons or diving on migrants exhibiting the bad manners of flying through their airspace.) I had hoped for a few more accipiters to do a little more comparison work (particularly that big gray one, but my new theory is that they don't really exist. I think photos of that unmentioned species are just Photoshopped Cooper's Hawks...) Still, this adult Coop spread out into the classic soaring pose above us, big head projecting beyond the straight leading edge of the wings and with nicely graduated tail feathers (longest in the middle) conspicuously arranged. 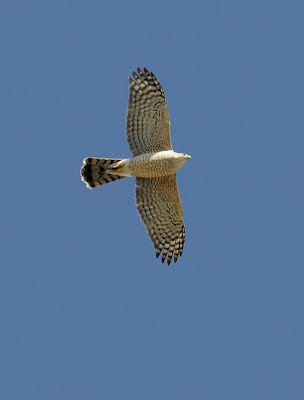 Similarly, I wouldn't have minded a bit more falcon variety in the mix, but this Prairie Falcon made a few lovely turns at about eye level as it made its way northward along the eastern margin of the ridge. It certainly had its eye on me- wondering what the big eye was looking back at it, I'd guess. A bit of tail molt going on there, too- R4 missing (the 4th tail feather out from the middle), creating a light gap near the outer edge on each side.

Still, I'd have to say the action that day was better in the non-raptor category. A few sorties of Mountain Bluebirds made their way along in migration, and Ravens rode the wind in hawk-like fashion, unlike the American Crows that also went by a few times, flying with a lot less panache. One raven made a couple of laps up and down the ridge, recognizable by the missing primary in the left wing and its very tattered plumage- looks ready for a new set of feathers ASAP! 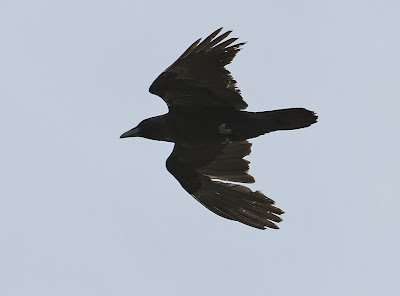 I always like the songbirds that are on the ridge, and Saturday's visit (my first in this habitat this spring), brought me my year Bushtits, Western Scrub Jays, and Spotted Towhees, along with Canyon Wren. The Canyon Wren was feeling frisky, singing from near and far- often at the edge of earshot but sometimes choosing a conspicuous post on a rocks right in the hawkwatch area. There was a calling female around, too, no doubt encouraging her mate to show off. These are the best shots I've taken of the species, which is usually out of reach up on cliffs or in rocks beyond good photography range (especially since the bird is so small.) It is one of my favorite birds, always invoking memories of canyon country and western tableaus. I particularly enjoy the combination of their descending song bouncing off towering cliffs, accompanying the soft slapping of water on canoe hull and splash of paddle on river trips through Canyonlands. I hope you enjoy these pics as much as I enjoyed taking them. 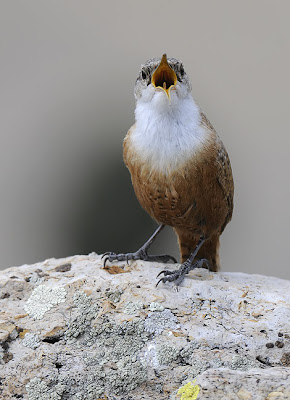 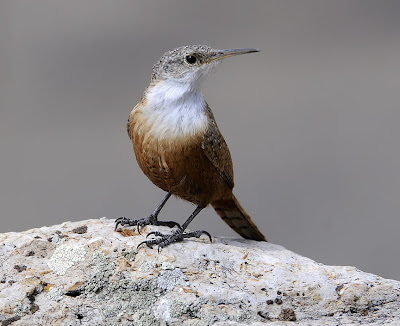 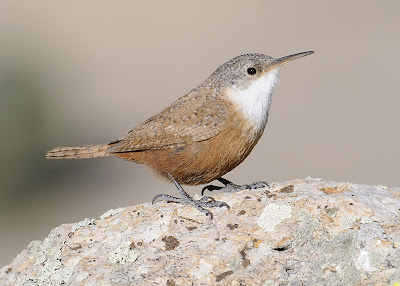 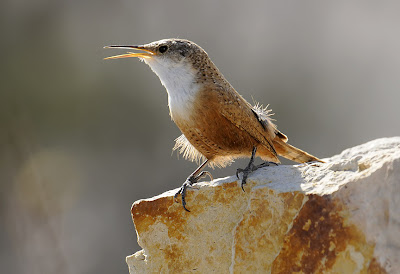 Bill, wonderful pictures of the Canyon Wren. I haven't been able to get a decent picture of them yet!

Great photos. I was up this past Saturday and had great looks, but when the camera was out the raptors weren't - so it goes. Thanks for sharing.