In my last post I reported on a visit to the nest of a remarkably powerful forest predator, the Northern Goshawk. I also commented on the difficulty I'd had photographing the species until this year, when I finally got a distant flyby shots in the spring and then visiting the super cooperative birds in N. Colorado a few weeks ago. 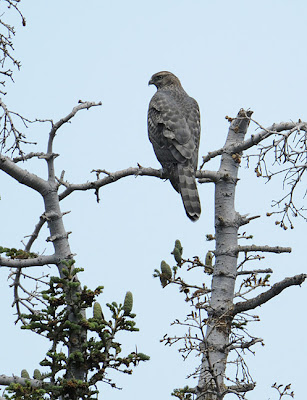 Well, to abuse a cliche, when it rains goshawks it pours goshawks! I just got back from a Southern California birding trip on Sunday, including a couple of days out on the Pacific Ocean (more on that in another post.) A few days prior to my boating adventures I was at the Santa Ynez River estuary where I crossed paths with Wes Fritz , who knows where every bird can be found and photographed in that part of the state (I'm not kidding- it is what he does! If you have holes in your list that you are trying to fill, engage his professional services and he'll go dawn to dusk or beyond to find birds with you.) In a major stroke of luck, it turned out that he wanted to go on a wild Gos chase to follow up on reports he'd heard of potential sightings at a campground in one of the coastal ranges, and many of my target birds could be found up there, too. So we decided to give it a try the next day. 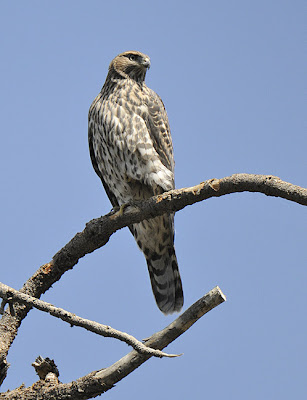 On the way up, Wes helped me get all of my wish list birds plus other SoCal goodies. My targets acquired, now it was time to look into this goshawk business. When we found the campground there was only 1 occupied campsite, and when we spoke to the gentleman there he said that indeed he had seen a hawk recently, sitting on his RV as it turned out! Oh, and would we like to see the pictures? Yeah- while blurry, definitely GOSHAWK!! And then he volunteered that a few days prior, he and his wife heard and saw a noisy hawk just down the trail from the campground. It was making piercing calls- not the Hollywood raspy scream of a Red-tail. After getting a better description of the site, we set out down the trail to see what we could find. 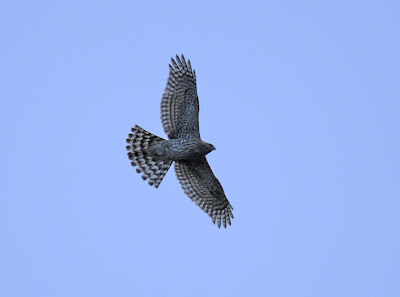 After about 1/2 mile, Wes spotted what looked like a potential Gos nest right over the trail in the top of a leaning snag. We worked for a while trying to get pics through the dense pine vegetation and estimate the nest height and diameter along with GPS coordinates to help out a mutual friend studying the species in S. California. Then a piercing set of calls began a bit farther along the trail. Jogging over, we were dumbstruck by a juvenile Goshawk perched in the top of a tree downslope from the trail! Wes started videotaping and I started hammering with the DSLR. Not long out of the nest, it and a sibling were hanging out in the vicinity, sometimes calling, sometimes quiet, alternating short circling flights with perching, no doubt waiting for mom or dad to bring back some food. At one point an adult blasted by high overhead, probably just keeping tabs on juniors 1 & 2. 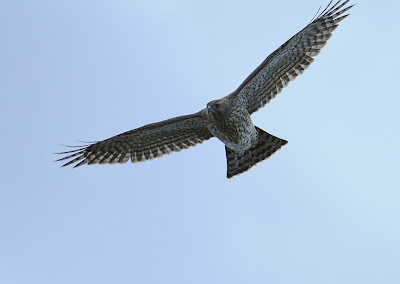 This is a pretty remarkable location for nesting Goshawks, on the extreme southwestern edge of their breeding grounds in California. In fact, the nest was under 40 miles from the beach, putting it beyond most breeding range maps for the species. At one point, one of the juvs landed on a branch directly over me, probably curious in the way of some young birds. It called some more, a most spine-tingling experience at point-blank range, while its sibling called from downslope. Needless to say, we returned from the outing quite excited. 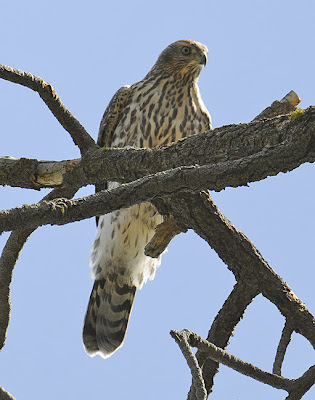 Drooling at those shots.

Hey Bill, what campground was that? I'm from that part of California and never managed to track them down there. Got great looks of one soaring over Madera Canyon last month though.