Cookin' on the Condor Express

I wrapped up a very productive trip to Southern California with a 14-hour long pelagic trip into deep waters out of Santa Barbara on 25 July. In order to squeeze in 250+ so miles of ocean birding without going overnight, a very fast boat is needed. Enter the Condor Express, a whale-watching catamaran capable of 30+ mph crusing. While this might not sound impressive in a car-based frame of reference, it is really flying for a big boat to do speeds like this in sizable Pacific swells.

We got as far as 107 miles or so from Santa Barbara, in waters up to 2000 fathoms deep (12,000 feet.) The hope on a distant, deepwater pelagic like this is to find some choice birds that rarely approach shallow waters closer to shore. The prevailing sentiment among my friends before the trip was that there may not be many birds out there but any one might be really good. To mangle one of Forrest Gump's lines, pelagics are like a box of chocolates- you never know what you'll get. Well, we got more than our share of treats! A full trip report can be found here, but let me say that we saw lots of birds out beyond the Channel Islands, with a count of 136 Cook's Petrels(!!!) and an adult Red-billed Tropicbird for the cherry on top. These two, along with Xantu's Murrelet (unfortunately not photographed) and Leach's Storm-Petrel were lifers for me.

Here are some photographic highlights of the trip: 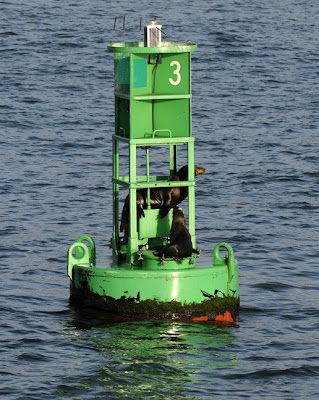 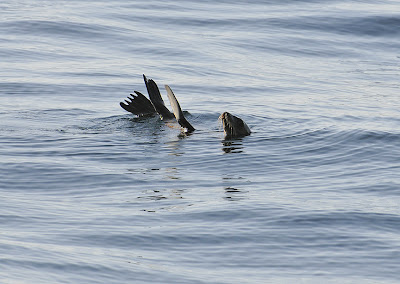 Once the boat passes the harbor marker (and its loafing California Sea Lion crew), the four computer controlled 740Hp Detroit Diesel engines propel the Condor Express into warp speed, heading for a gap through the Channel Islands and towards deep water! In open water, sea lions bask by holding their rear flippers and one front flipper in the sunlight. 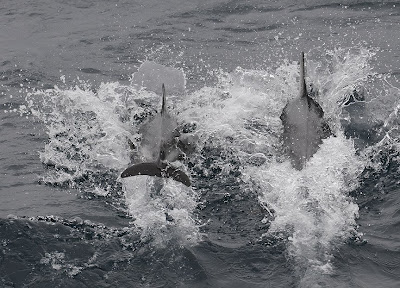 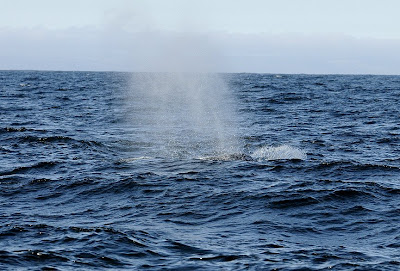 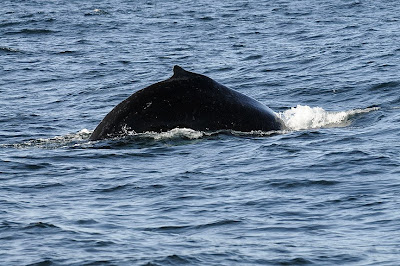 Sea mammals are always of interest, and we enjoyed several pods of Common Dolphins and this Humpback Whale. I also got my lifer Blue Whale and saw spouting Fin Whales. The Santa Barbara Channel is probably the best place in North America to see these largest of animals to ever live on Earth- next time I'm back in the summer I'll save a day strictly for whale watching. 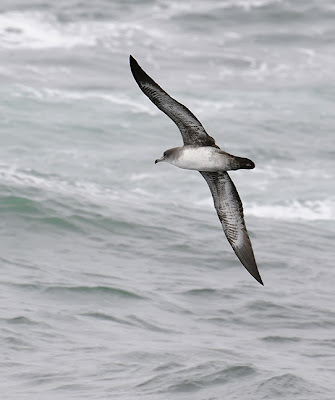 Closer to shore, the most common seabirds were Pink-footed (here) and Sooty Shearwaters. 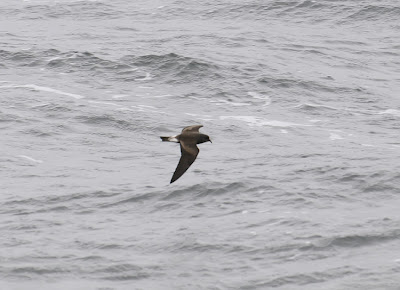 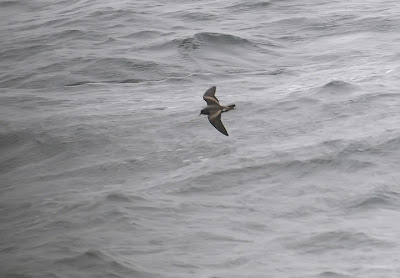 One of my 4 lifers on the trip, Leach's Storm-Petrels offered quick, erratic looks throughout the day. These birds range from light-rumped (top) to dark-rumped. The bottom bird is on the dark end of an intermediate bird, I'd say. All I managed were soft shots like these but still, I was thrilled to see 'em! 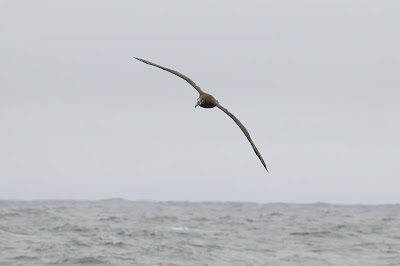 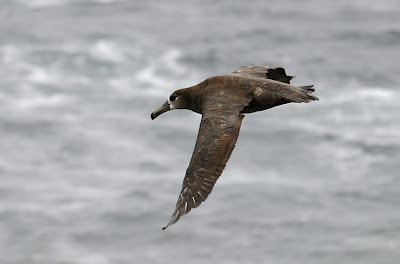 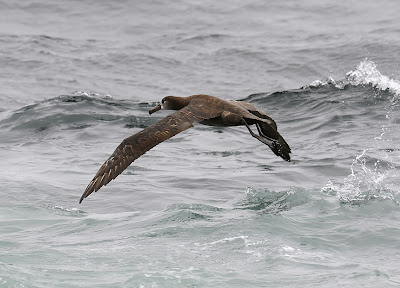 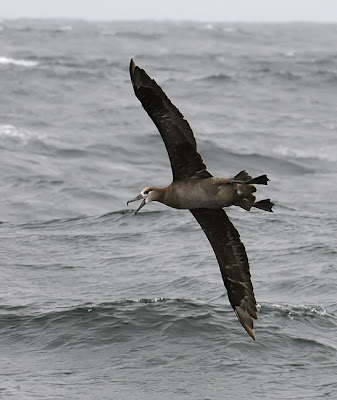 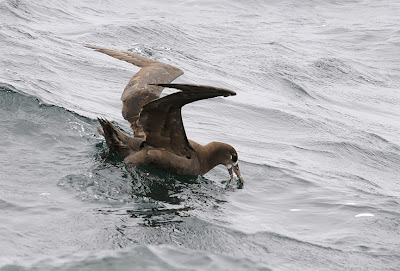 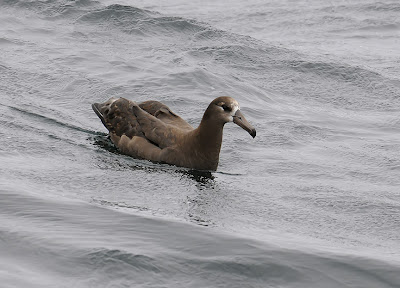 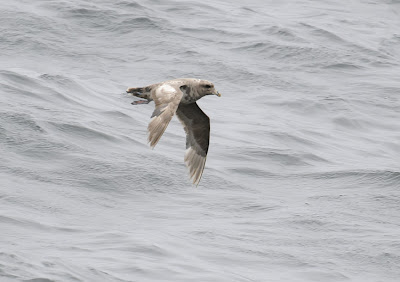 We also had a pair of really haggard-looking Northern Fulmars in desperate need of molt, which they had just begun. The manky, bleached feathers are the old ones, while the crisp-looking dark ones are newly grown.

We had high hopes of seeing a good gadfly petrel like the Cook's Petrel above. When the first one was called it was a struggle for many of us to get on it- a small, distant, fast-flying pale bird among the swells and whitecaps of the Pacific in overcast conditions. It was like looking for a gray needle in a gray haystack. The picture above is actually of a fairly close bird but it gives you a feeling for how easy they are to get lost in the waves. I finally got so-so looks of the first and was pleased with picking up a lifer, but it was far from a satisfying look. Soon another appeared, offering better looks and lots more cheers and high-fives around the boat as more folks picked up the bird. More chumming and more birds eventually brought really good looks. At times small groups of up to a dozen Cook's were seen together, and several close (but fast) flybys of the boat challenged photographers to keep up. 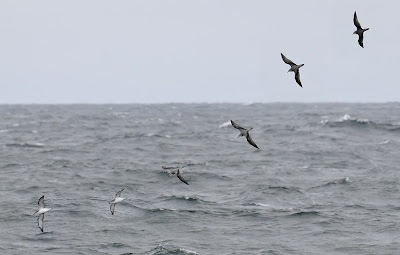 Pterodroma petrels like Cook's have an unmatched speedy arcing flight style that is a wonder to watch. They can veer up above the horizon and disappear between waves in nearly an instant, all without a wingbeat. They have the perkiest dynamic soaring style that I have seen, and it really must be seen to be fully appreciated. Above is a series of 6 consecutive shots taken at 5 frames per second, so this represents 1.2 seconds in the soaring life of a Cook's Petrel. You can see that their upperwing pattern somewhat resembles the dark "M" on a lighter gray background seen in Buller's Shearwater, but the flight cadence and style is totally different. Their belly and underwings are mostly white- sometimes the way to pick up a distant bird was to see the white flashing as their underside came into view. 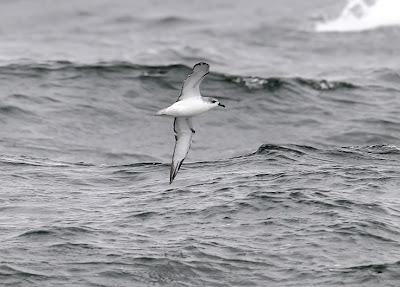 One more gratuitous shot of this fabulous bird.


And then, as if the Cook's show wasn't enough, an adult Red-billed Tropicbird flew in to investigate, circling the boat lazily three times before heading back into the open Pacific. Not only a lifer species, but a lifer family (Phaethontidae)- and a really cool bird family at that! Kind of rough photographing a white bird against a bright overcast sky, but as Borat would say, Is Very Nice!! 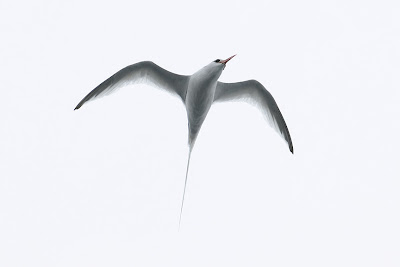 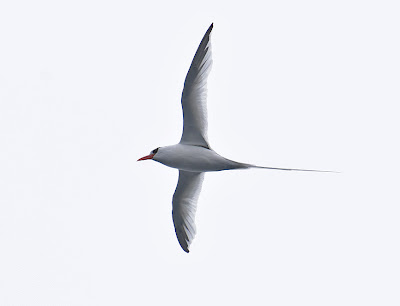 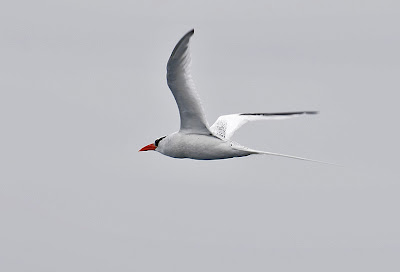 Hi Bill,
I see you've been traveling, so you may not have gotten to my email yet. Anyway, I'd love to use one of your Aplomado Falcon photos on the cover of Tucson Audubon's magazine but haven't heard back from you yet. Our deadline is fast approaching, so drop me a line.
mgriffiths@tucsonaudubon.org
Thanks!
-Matt

What a fantastic Cook's swoop shot. How can you take a shot like that from a rocking boat?

I just had to tell you I saw your photo of the Cook’s Petrel (Photo is courtesy of Bill Schmoker, "Geared for Birding" columnist in Winging It.) on the July 27 post in Maynard’s PEEPS online. Stunning! I don’t know how ya do it; sheeshhhhhh, it looks like it’s in 3D! Beautiful…

It’s the same one you’ve posted here: “One more gratuitous shot of this fabulour bird.”