Horning In On The Action

The highlight of my birding outing today wasn't a bird at all.

This morning, my buddy Nathan Pieplow & I met Ted Floyd and Christian Nunes up at the Fawnbrook Inn at Allenspark, Boulder County's renowned Rosy-Finch locale. Rosies came in two waves of 150-200 birds early, only staying for a few minutes total, making photo opps few and far between. Brown-capped Rosies were in the majority, with a good showing by Gray-crowned (including some Hepburn's) and a spanking male Black, escorted by one or two females. For most of the two sorties the birds stayed up high, and when some dropped down for chow it wasn't for long. Still, getting all three species for the year is always a nice thing that shouldn't be taken for granted. 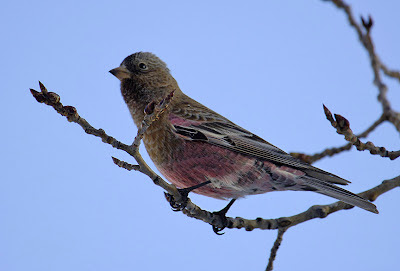 The other few hours that Nathan & I spent waiting were punctuated with some other nice mountain birds and some good conversation. Nathan did some sound recording with his slick new parabolic mic and I cycled my shutter a few times. 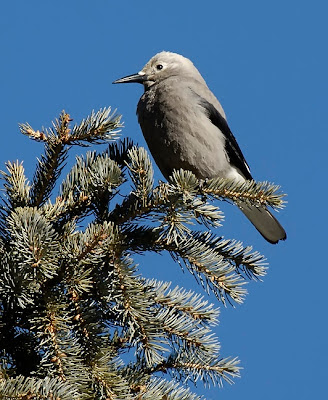 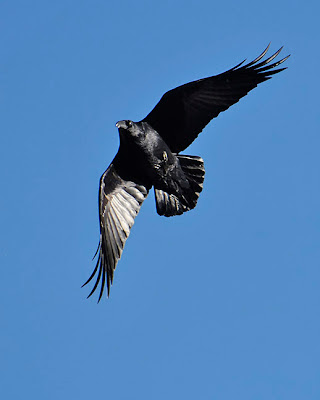 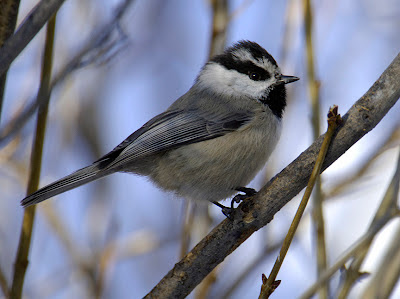 Heading back down, we trolled around some on the back road through Raymond (town sign: Everyone Loves Raymond!) and Riverside (the scattering of homes where Whitey the Steller's Jay made waves in 2004) with hopes of a Northern Pygmy Owl or Northern Goshawk but the only new bird that we added was a Red-breasted Nuthatch. Thinking that was about it, we regained Highway 7 and headed down towards Lyons.

On our way down we noticed some interesting wildlife. Not hard to notice since the wildlife consisted of half-a-dozen 250-lb Bighorn Sheep rams standing in the middle of the pavement licking road salt, and a couple more enjoying the sunshine on the hillside above the road. Cool!! Thinking back, I think this is the first time I've seen this species in Boulder County. We enjoyed the big mammals for quite a while, watching them graze, lick road salt, and get a drink from the St. Vrain River below the road. Nathan pointed out an adult Golden Eagle soaring above and around the granite cliffs above us, but soon we turned our attention back to the sheep. 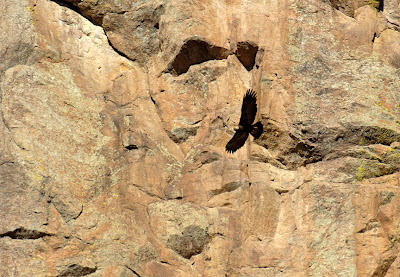 Besides enjoying the rams, I saw a really funny thing transpire right in front of me. Obviously, Bighorns on the road induce a bit of a traffic jam, with some folks pulling off the road where possible and others just stopping right in the traffic lane. One car, heading down, had slowed way down to enjoy the show. Another car in a big hurry quickly caught up to it just as it went by me. As it went by, I saw the driver in mid-curse, road-raging over the impediment. The amazing thing, though, was the instant that the road rage transformed into awe as the driver saw the rams alongside the road. Lip reading, I swear she said, "DAMMIT! WHAT THE HE... WOWWWW!!!" as a smile blossomed across her face. Glad she had an attitude adjustment. I know I enjoyed the encounter- here are some of my favorite shots. 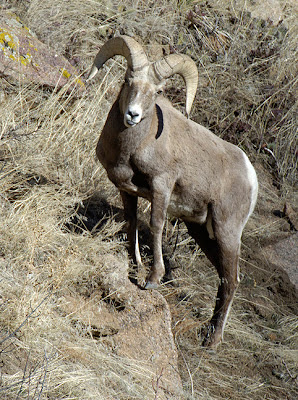 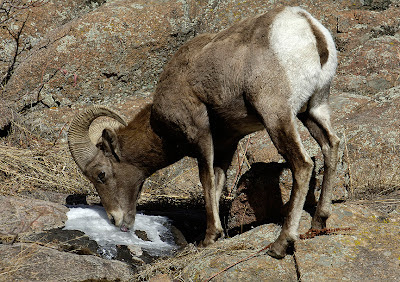 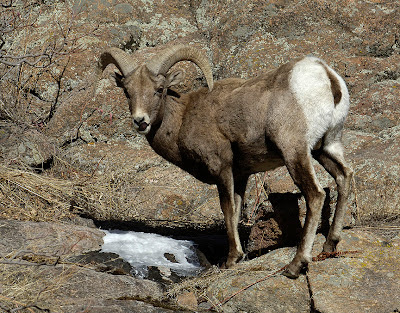 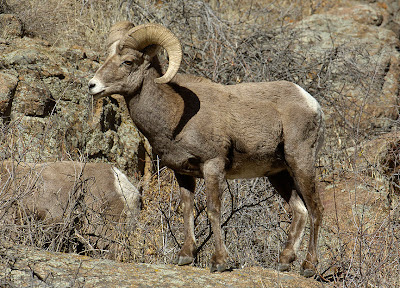 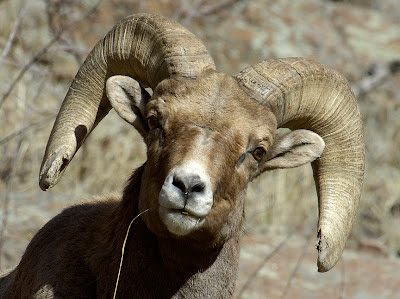 Wow, that was quite a trip. A super collection of shots, including the sheep. And then human drama with the road rage lady. Quite an outing.

Thanks, Bill, for posting this. It's been way too many years since I visited that area of Colorado; St. Vrain River and its surroundings are so beautiful. And to think you not only saw the rosy finches, but such close-up views of bighorn sheep. Wow! Talk about being in the right place at the right time. I would love to have that opportunity some day. Thanks so much for sharing this outing.

I really like the last image, Bill. I never realized how wide-set their eyes are.

Very nice. I was up there in November, too early for the rosy finches, but did have one nice bighorn ram perched on a rocky outcrop along the road on the way back down. Lots of fun!

Hi Bill. I just got a link to your blog and have forwarded it to some birders up here in Spring Gulch (Lyons). Last year on New Year's Eve and New Year's Day when we had a very windy snow storm, the rosy finches were on my feeders in a feeding frenzy. It was absolutely amazing. I guess they'd left Allenspark and had gotten lost. WOW!
Anyway - thanks for the great shots!
-Laurie

What a photographer you are... I do some amateur work, and love it, but nothing like yours. ha.

be back to look at more and tell others. novella