My dad Jim & I went down to Pueblo and Cañon City, Colorado to start the year's birding. Heading that far south in the states opens up some possibilities that aren't around the Denver area, like having most of Pueblo Reservoir ice-free & hosting a nice selection of waterbirds and gulls (we ended up with 7 gull species!) There's also a host of good birding spots around Pueblo & Fremont Counties, plenty to keep us busy for a couple of days' worth of birding.

One specialty of the area is Rufous-crowned Sparrow. A colony is located on the west side of Cañon City, about 45 minutes west of Pueblo. This is pretty much as far north as the interior population of the species gets, although California birds range a bit farther north. I've seen the bird once before in Colorado but not very well, and the birds I've seen in Arizona have been pretty cool, but I finally got some pics to write home about: 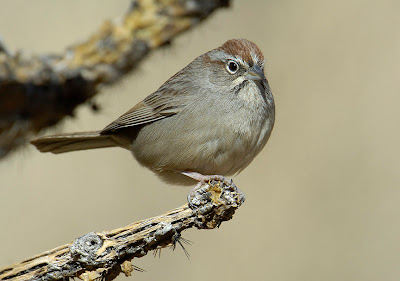 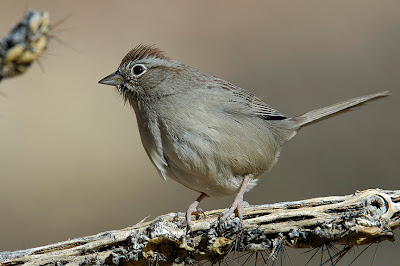 As counterpoint to this desert-scrubland specialist, we found a handsome White-throated Sparrow along the Arkansas River in Cañon City. These are rare but not unexpected winter visitors to Colorado, but breed in the Boreal Forest of Canada and the Great Lakes States, so it came a good distance to winter in Southern Colorado: 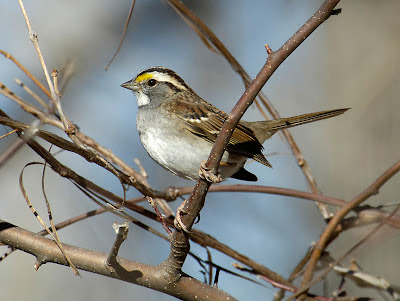 The best surprise of the trip, though, was a juvenile Yellow-billed Loon that some buddies of mine spotted out on Pueblo Reservoir. We had been playing birding tag with them most of New Year's Day, running into them as they were heading off to another stop. Near the end of the day, my dad & I were in W. Pueblo cruising some neighborhoods looking for White-winged Doves (& earning the hairy eye of a sherrif's deputy) when my phone rang with the news. The sun was about down, but luckily we were only about 5 minutes from the lake, and we headed up with no delay. As we bounced along the rutted rocky road to the vantage point where my friends were, a few of them waved us in- a good sign. Sure enough, a few scopes were on the bird and we just stepped up to view it in the waning light. Some birds are easier than others- thanks, amigos!!

Anyway, we saw the bird again the next day, in better light and much closer. I digiscoped it and took some digiscoped video through my Leica rig. I like the second half of the video where it is swimming with a Common Loon. In comparison to the Common Loon, you can really see the Yellow-billed's size difference (YBLOs are about 30% larger than COLOs), the larger & more upswept yellowish bill, the paler overall coloration (with a bit of straw-yellow tint), the more pronounced scaly pattern formed by the pale edges of the back feathers, the blockier head with the bump over the eye, and the darker patch behind the eye. 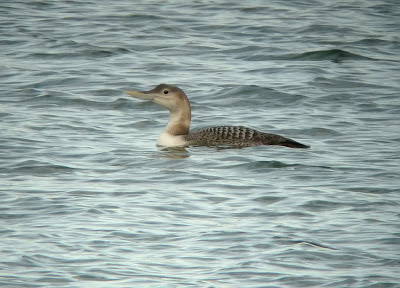 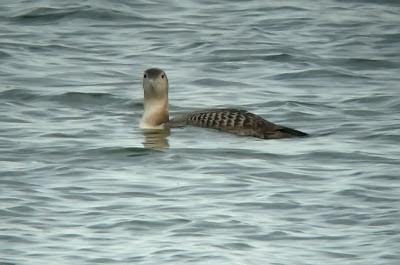 If you haven't birded in this part of Colorado, you could jump-start your list by attending the 2008 CFO Annual Convention in Cañon City, 16-18 May.
Posted by brdpics at 7:07 PM

We have had a few white throated sparrows here and also some yellow billed herons, lots of gulls and commonn loons.I have really enjoyed reading your blog and I love the pictures and see you have a lot of beautiful birding and
nature blogs and photos.. ...I would like to add you to my nature carnival round up posts. Cheers.

Great photos! I was just wondering if you have a guide for the pueblo area? I will be visiting my parents who live there and I need places to go. I am hoping to see prairie chicken, lark bunting, scaled quail (not sure if they actually are found here my dad was told they are by a local), etc.

Thanks for any help you can provide.