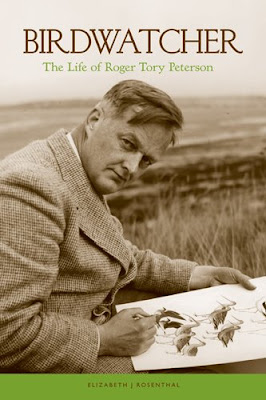 I was lucky enough to receive a review copy of Birdwatcher: The Life of Roger Tory Peterson by Elizabeth Rosenthal, which I've finally been able to read. Like the new Peterson Field Guide to Birds of North America, its release coincides with Peterson's 100th birthday. It is a wonderful commemoration of this historic anniversary.

Rosenthal skillfully takes us through the stages of Peterson's emergence not just as a game-changing field guide author but as a world-renowned naturalist and conservationist, including aspects of his family, his associates, and his travels and the influence they all had on him. As a bird photographer, I especially enjoyed the details of his passion for photography and its progression through generations of improving equipment and his growing skills behind the lens. I was astounded to learn that upon his death, Peterson had over 500,000 photographs in his collection, edited down from over a million- a figure impressive even in the digital age, but more so since Roger shot film!!

While I was never privileged enough to meet Peterson or hear him speak, I remember thumbing through my grandparents' editions of his guides while growing up, full of interest in the natural world and thankful to have references to decipher my sightings. The first bird book I ever bought for myself was Peterson's Field Guide to Western Birds. I got a lot of satisfaction reading through the section of "fledglings", other prominent birders and naturalists influenced by Roger's work, and finding that I have met and even birded with several. That one degree of separation is pretty exciting and motivational- something to ponder as I continue my own exploration of the natural world.

A center section featuring photos of RTP throughout his life and many of the most influential people in his career richly enhance the descriptive text. The generous use of quotes from RTP and other key players the book also keeps the reading lively. I think that anyone seeking insight into one of the most important and influential figures in 20th-century birding and natural history will enjoy this book immensely. I suspect many would also enjoy gifting the book to a fellow bird &/or nature lover in their lives.
Posted by brdpics at 8:10 PM

I've still got the 1st edition of RTP field guide to the Birds of Britain and Europe, a major breakthrough in the UK. I think I bought it in about 1953, had to save up my pocket money, and although the layout now is dated I've kept up with each new edition. Also on the shelf next to me is "The World of Roger Tory Peterson" by J Devlin and G Naismith. I'll watch out for the new biography when it's published over here.

Anonymous said...
This comment has been removed by a blog administrator.
6:29 AM