In contrast with the white wildlife I featured in my last post, here's a dark-morph adult Harlan's Hawk (harlani subspecies of Red-tailed Hawk) that I saw on November 1 and again today. If you've followed my blog for a while you'll know I like dark hawks about as much as any bird, and they don't get much darker than this. Still, it has a few white streaks on the breast, typical of harlani as opposed to dark-morph calurus (western) Red-tails. I first saw and photographed this individual in December of 2005, and it has been back to the same winter territory every year since. The bird is a tricky devil to photograph, though, usuall flying from its roadside power pole at the first sign of deceleration on my part. Fortunately, it sometimes flies along parallel to the road, heading for another power pole, allowing some shots in passing. 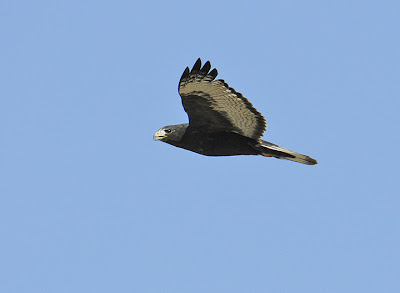 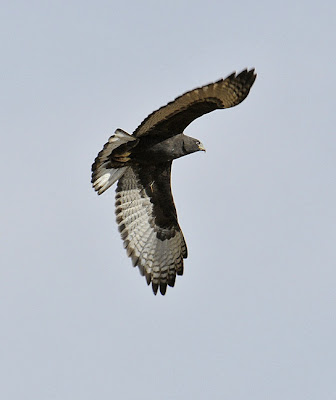 Love the second shot; due to the lighting; you can tell if the bird is 'concave' or 'convex'. Your eye is wonderful.

I love to see birds of prey.
Great bird in flight pic.