I was heading back from southern Colorado on Sunday, and chanced across three great photo opps involving white wildlife. The first spot was at the south boat ramp at Antero Reservoir, where some buddies of mine had been seeing Snow Buntings on and off for a few days. These are tough birds to find in Colorado, and they seemed to have reasonable site fidelity at this spot, so I was hopeful to get the chance to photograph them. Still, they weren't there for over an hour on my first attempt. After another hour+ of birding around the area, I came back to the boat ramp to try again. The buntings weren't there when I arrived, but I saw a white sock puppet-like critter pop up in the rip-rap to see what I was up to. When it crossed an open gap I could tell it was a weasel, although I had to research its identity when I got home. Luckily, the spot where I was sitting turned out to be along the weasel's path, and when it returned laden with its freshly killed prey I caused it to hesitate long enough for some fun pics. It would duck in and out of the rocky breakwater, sometimes with the vole and sometimes without, trying to figure out what to do about the camera-toting behemoth in its way. After a few minutes, it just did an end-around behind me through the edge of the parking lot and continued on its way along the lakeshore. Judging from that picture and the tail-to-body length ratio, with the tail over half the body length, I'm going with Long-tailed Weasel. I think the prey item is a Meadow Vole. Any comments on the mammal IDs? (Camera Trap Codger??) 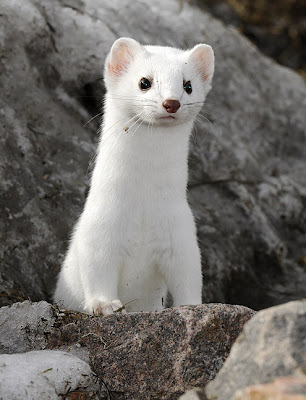 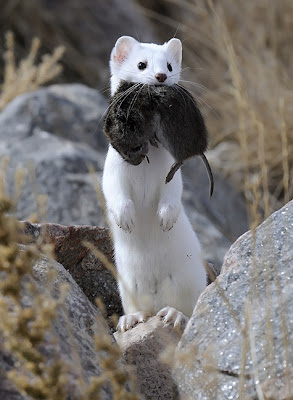 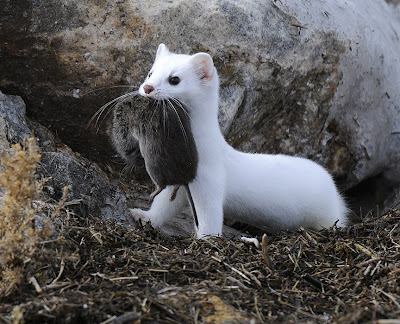 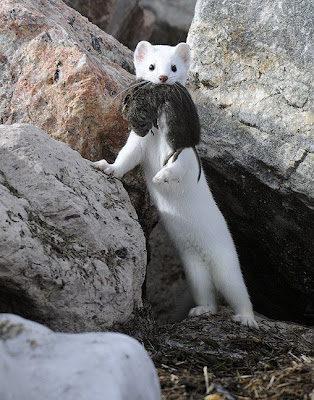 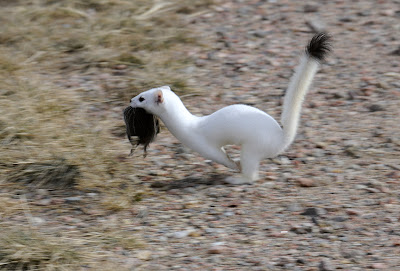 After the weasel incident, I didn't have to wait too long until the Snow Buntings came along, alerting me by their call. They foraged among the rocks and the wrack piled up on the lake side, offering some great poses. These are my best shots of the species so far. 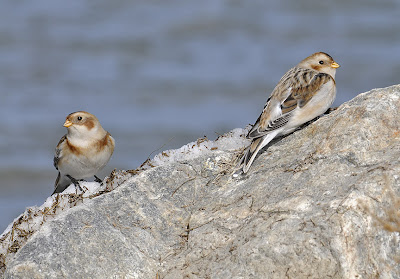 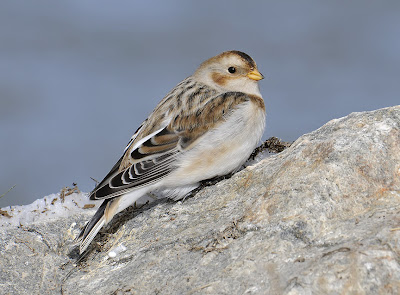 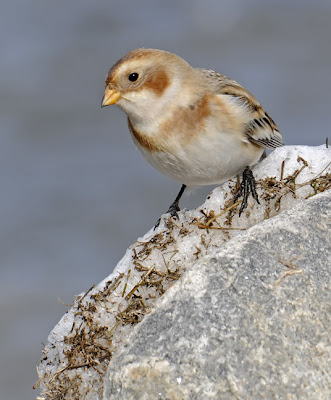 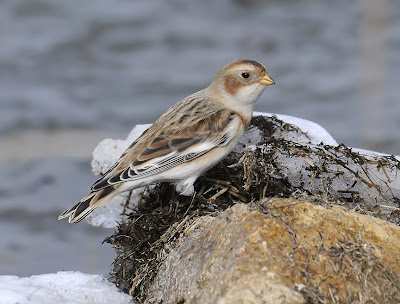 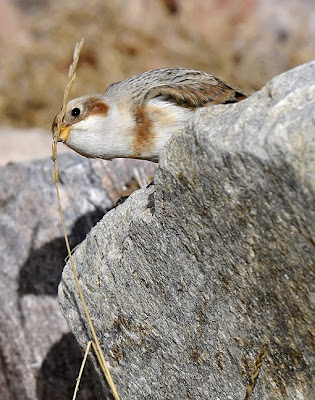 I took one more detour on the way home, 4-wheeling through snow to the top of Guanella Pass in search of White-tailed Ptarmigans. I see them about every summer when they are brown and mottled to blend in with rocks and tundra vegetation, but hadn't seen white birds in their winter plumage for quite a while. Finding them is harder now that the road to the top of the pass doesn't get plowed (it used to stay open all winter), but I found the right timing this year. I could still reach the top (but a non-4wd car wouldn't have made it), and there was enough snow on the high slopes above timberline to attract wintering ptarmigans. Most were pure white, but a few had a smattering of summer feathers left to molt. The challenge is finding these snowballs on a white mountainside. They like dwarf willows whose tips are sticking out of drifts, providing easy bud picking. This is the only bird I can think of that I usually find by following tracks- while they can easily fly they prefer to walk around and those snowshoe feet leave distinctive trackways. Droppings are also a good sign that you are in an area they like. If luck is with you, a white blob will suddenly move out of your way, and then you're in business. As long as you move slowly, the birds stay very relaxed, continuing their feeding and little vocalizations or snugging down out of the wind to relax. I talk to them as I move around for better angles, figuring that a predator would never be that visible & noisy. I'm sure it would be a comical sight to see me chatting it up with the plump little white birds, plopped down in the snow to get a ptarmigan-eye view while they go about their business. 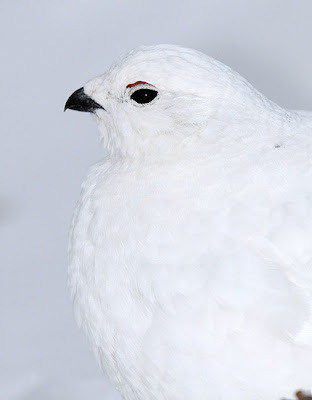 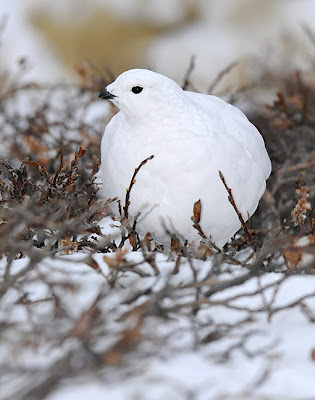 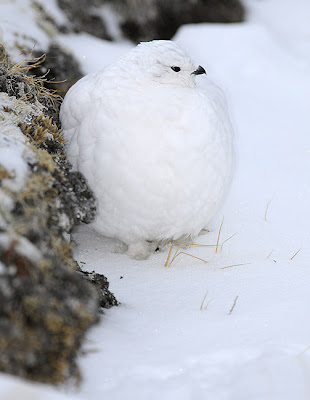 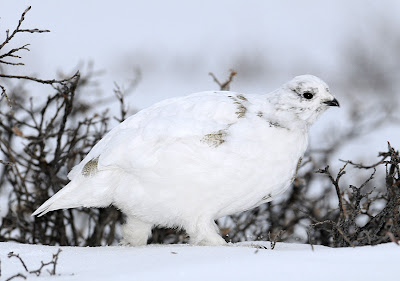 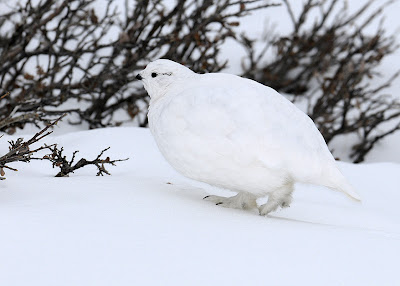 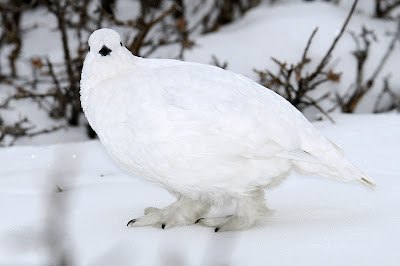 Love the weasel shots. It's absolutely adorable! Your photography is just so amazing!

Absolutely great shots...I've only had brief glimpses of any weasel, and those were of them galumphing away, so I must say I am impressed and very jealous!

Every shot is a stunner! The weasels photos are amazing, and I am very very jealous of how close you came to the White-tailed Ptarmigan.
Cheers!

Wow, fantastic shots as usual, Bill. And that weasel is priceless -- with prey (meadow vole) no less. I's say you have a longtail, perhaps a female, as she looks a bit small. I'm in awe!

Amazing photos. That weasel has such beautiful looking fur, and I chuckled when I saw the black tip on the tail. Great looking white wildlife.

Okay, I've been reading you for nearly a year and think this is your best post ever. Lovely theme...incredible photos... awesome birds...and the sock-puppet? Priceless!

Fantastic weasel photos, oh to find a location like that for a game camera.

Alos the first time for me to see a dark phased hawk. I spend hundreds of hours getting hawk photos with game cameras and never have seen anything like that. I do have an eagle that has a crossed lower bill.

Thanks to Codger I found your blog.