Beginning of a snowstorm, end of a blackbird

Well, it has been a pretty incredible winter break for snow. Round two moved in yesterday afternoon, threatening to nearly match our pre-Christmas blizzard of about a week ago. We ended up with a good replenishment of snow, but only about 8" this time. Things are still mighty white around here, though, and another bout is forecast for tonight.

Anyway, an interesting drama played out in our backyard yesterday afternoon as it was beginning to get dark. Char said there was a Sharpie in the backyard. Sure enough, there was a juvenile Sharp-shinned Hawk plucking the feathers off of a Red-winged Blackbird beyond our feeders by the back fence. (Check out the adult Sharpie that has been haunting our yard this winter here...) Mostly black feathers littered the snow around the scene, with some red epaulette feathers tossed about dramatically. I set my scope up in our back door, shooting with my digiscoping rig across the yard. In the intensifying snow and darkening early evening light, I was only getting shutter speeds of 1/50 of a second at best, and often dropping down to 1/20 second. This is exactly why I like to use a digital camera adapter and remote shutter release, to get things as steady as possible for sharp images. Even then, most of my shots of the actively feeding bird were blurry due to its movement. The only sharp ones came as the bird froze to look at something or in response to my pishing or rapping on the window.

Definitely a story of contrasting sides.

The RWBL must have been coming in for a last feed before the night of nasty weather set in. My feeders could have been an oasis of sustenance not far from the refuge of cottonwood and willow trees and the cattail marsh beyond. Instead, they became a field of ambush and the blackbird lost the gamble. Perhaps urgency to beat the nighttime blizzard overcame its normal prudence and caution. Maybe it almost got away, or maybe it never saw the sharpie coming in its attempt to top off on calories one more time before darkness and snowfall. Whatever the case, its need for caloric intake is over, and it instead provided calories for another bird higher on the food web. Feeder became feedee.

From the Sharpie's perspective, the blackbird kill represented a huge life-sustaining success. We saw the hawk sitting on a feeder earlier in the afternoon empty-taloned- clearly that ingress into our yard was an energy-wasting failure. With this later success, though, the raptor could go to heavy cover, perhaps deep in a spruce, to wait out the storm with a full crop. At about 52 grams, a Red-winged Blackbird is substantially larger than the House Sparrows (28 grams ) or House Finches (21 grams) that we often see Sharpies take in our yard. (Weights from the Sibley Guide to Birds.) If the hawk is a male, it probably only weighs around 100 grams- this would be a take-down of about half its size. If female, it weighs perhaps 50 to 100 grams more (SSHA masses from Hawk Mountain banding data.) Either way, that is a significant kill for the bird, one that will go a long way towards surviving many days of tough weather.

So take your side, mourning the Red-winged Blackbird or cheering the Sharp-shinned Hawk. Or refuse to take sides, instead just marveling in the constant battle for survival, even in our back yards. 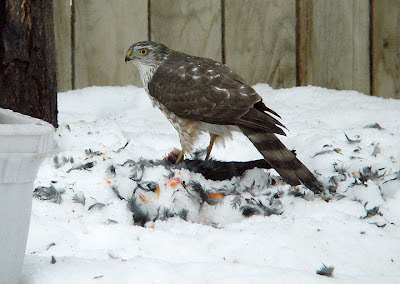 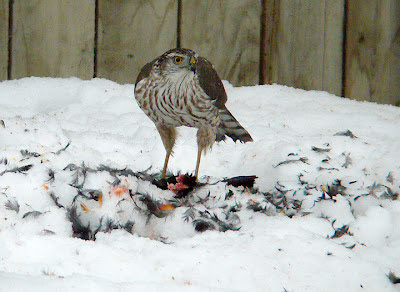 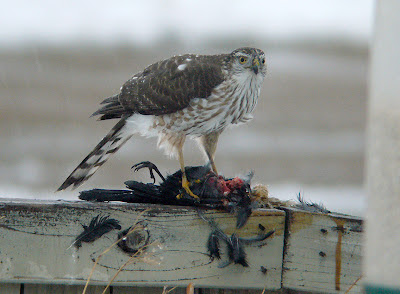 Your blog is great! I really like birds, right?
Fantestic!