Even though I didn't set out to go birding today, I ended up with a nice trifecta of raptor photo opps. It all began as I was drinking coffee and reading the sunday paper with G.J. on my lap, letting momma sleep in. The feeders were busy as birds were re-fueling after a frigid night (near 0° F at our casa.) Then a Blue Jay gave its loud, high, triple staccato alarm call, birds scattered, and a Sharp-shinned Hawk eased through the yard. Getting nothing on its initial pass, it settled in on the back fence to see if it could get a dumb House Sparrow to bolt out of a blue spruce. The light was pretty good, so I grabbed my DSLR and went out back to see if I could get anything. After taking some shots from the part of the back patio that I had shoveled, I realized that the light would be much better from around to the south. This meant walking through untracked ankle-deep snow in my slippers (plus I was only wearing my sweats in the now 10° F temps.) But oh, well- sometimes you have to put comfort aside to get the killer shot. Anyway, it let me get pretty close, with some dramatic shots showing that sanguine eye. I think it might have been waiting to see if I would flush anything out. Eventually a bird made a dash out of the yard with the Sharpie on its tail- I didn't see the outcome after they dropped behind my fence but I have the feeling that the score was Sharp-shinned 1, House Sparrow 0. 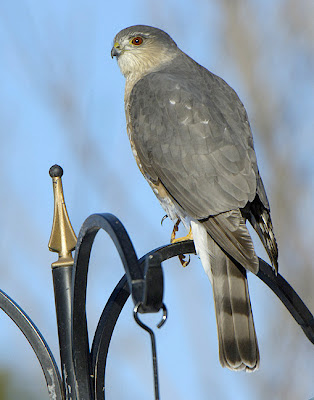 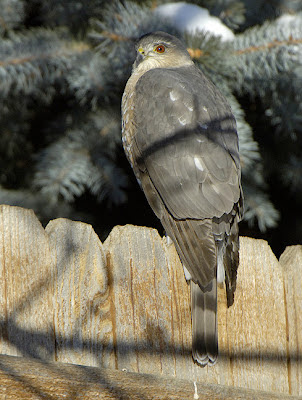 So with the sunny day and snow on the ground, I decided to drive around some looking for raptors- the snow gives a good light bounce, lighting up the birds well from underneath. I went by a stretch of road where a dark-morph Harlan's Hawk has been frequenting, but I couldn't find it. Blazing by another intersection farther south, though, my attention was arrested by a dark, and I mean coal-black-dark, buteo on a power pole. Not one of those rufous birds (cool as they are), but a Black-Hawk-black hawk, if you get my meaning. I turned around and did a few drive-bys before finding a reasonable position to shoot out my driver's side window. The bird tolerated me for a little, and then flew up into a tall cottonwood. I drove by the bird again, parked a bit to the south, and walked up towards the bird with the sun at my back. As I got closer the bird screamed a few times and then took off. Amazingly, instead of flying away or even tangentially skirting around me, Blackie quartered towards me! I was having trouble keeping the bird centered, hoping I wouldn't blow it, wincing inwardly each time I heard the shutter fire with the image of wingtips getting cropped, but with the miracle of 5 fps bursts I managed to get some in the frame. I thought it would turn out to be a dark Harlan's Red-tailed, but it is actually a dark-morph calurus (Western subspecies). I wasn't sure if the pale, unbanded undertail was OK for calurus, but the lack of any white on the breast and the red dorsal tail surface all point to the Western subspecies. Thanks to Tony Leukering, Chris Wood, Jerry Ligouri, and Brian Wheeler for the ID confirmation. (Unsolicited plug- if you like hawks you have to get one of Brian's raptor ID books and Jerry's book, Hawks from Every Angle!) These guys are even rarer than a Harlan's around here, and these are the first good pics of this form that I've gotten. It is a very dramatic bird: 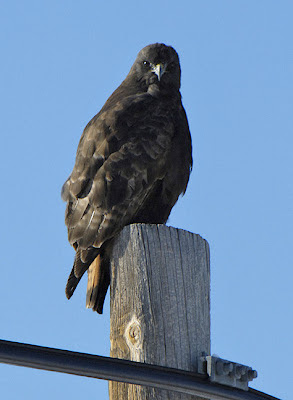 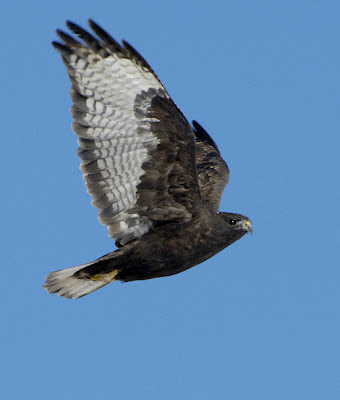 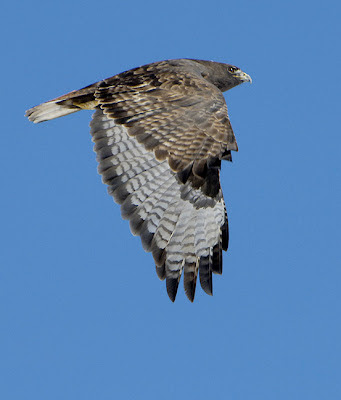 So now I was utterly happy with my day's raptor photo tally, but I thought I'd cruise the roads north of Boulder Reservoir before heading home. Multiple prairie dog towns and abundant open space in this area makes it a pretty good winter raptor resort, and today didn't disappoint. This Prairie Falcon was keeping vigil from a power pole alongside the road. As I watched the bird it took off, flew away, but then turned parallel to the road, giving some neat side-on flight shots. About half an hour later, I re-found the bird finishing off a meal on another pole. Great news for me- sated raptors like to stay put, and can be very cooperative for photos. The mega close-up is digiscoped from almost underneath the bird. Neat way to finish off the day's shooting. 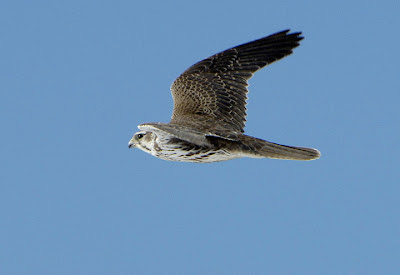 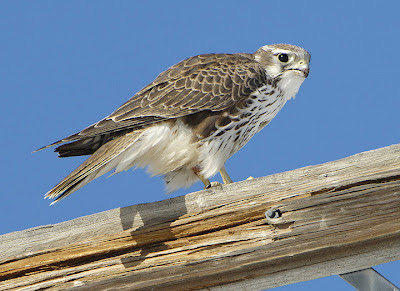 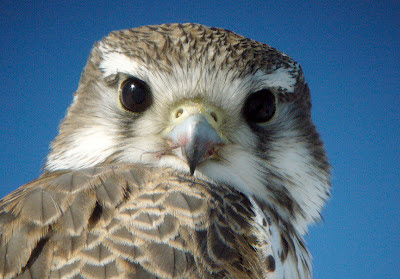 With that last pic in mind of such a cute face, I am reminded that the critter is an incredibly fine killing machine! I wonder if any of it's dinosaur cousins could ever have looked so adorable? Bill, Great job on a fabulous day!
Eric D. Miller (geoteacher)