(California Dreaming- Round 1 here...)
Another fun thing about pelagic trips is the potential for marine mammal sightings. A trip out of Monterey guarantees some cool blubber-bearing critters, although each day may hold its own special surprise. Right in the harbor, California Sea Lions are easy to spot. Even better, though, is encountering a group out in the bay. At sea they seem to forage in small groups, each animal looking sleek and fast. They are also pretty wary (based on my sample size of about 5 such encounters...)- they'll watch the boat coming and then break away at speed, schooling remarkably like small fish- no small feat for animals weighing hundreds of pounds each. 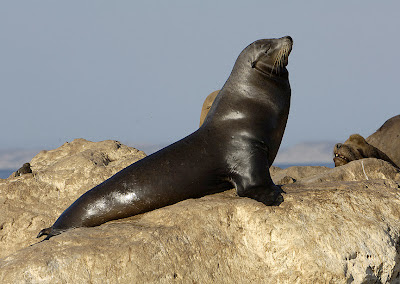 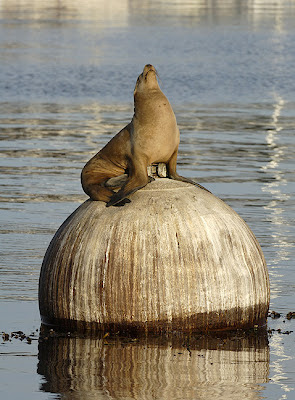 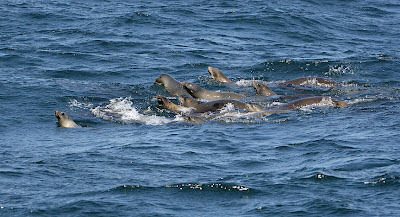 California Sea Otters are pretty interesting too- we saw some in the kelp returning to port, but the best viewing was a remarkable group of about 40 in the Moss Landing harbor. The lighting completely sucked, but I digiscoped some doing their otter things: 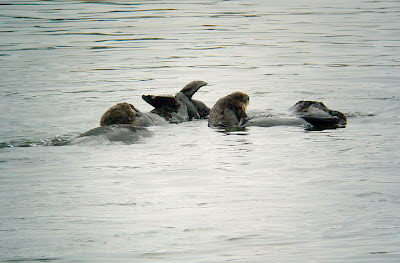 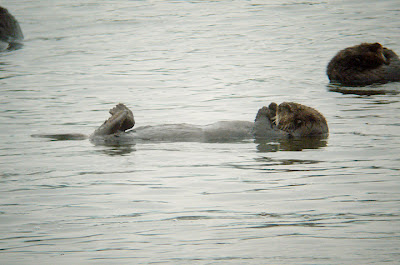 But the big mammal stars out there, of course, are the whales. Humpback Whales were visible from the shoreline highway south of Monterey, and we saw numerous individuals each day from the boat. Unfortunately I didn't see or photograph any doing spectacular breaches, but here's a shot of what you typically see when they spout. 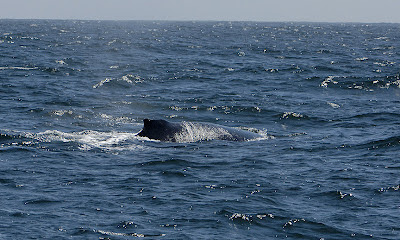 Other whales we saw included Pacific White-Sided Dolphin, Risso's Dolphin, Northern Right Whale Dolphin, and Harbor Porpoise. I was disappointed to learn that Blue Whales weren't being seen in the bay this fall, but that was more than made up when we encountered the "friendly pod" of transient Killer Whales both days out on the boat. Each time, the pod approached the boat and loitered nearby as we sat idling, showing off a trophy scrap of seal. At times you could look down into the water at them, they were so close. I even got Orca blowhole mist on my face once when one spouted nearby upwind. Several times, one would engage in a bout of tail slapping. Even the official whale-watch cruises have trouble regularly finding these amazing animals- we were so lucky! As a birder I almost hate to say it, but I think for most folks they may have been the highlight of the two days' worth of pelagic birding. 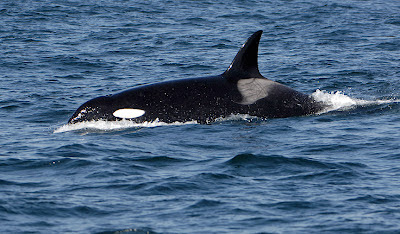 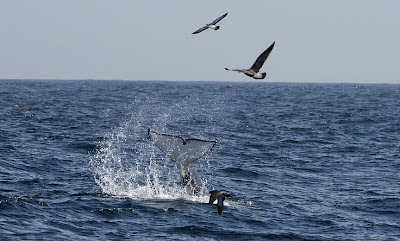 Quiz: Can you ID the birds in this pic? 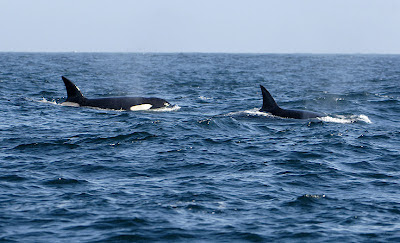 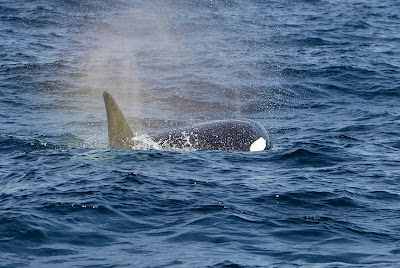 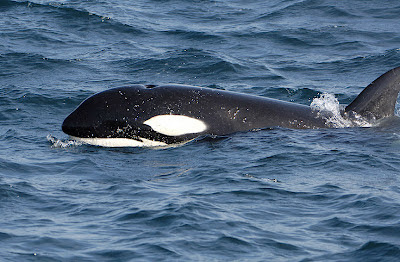 Look closely- yo can see the eye on this one (just under the forward end of the white spot.)

All for now- peace out-

Could the mystery birds be Manx Shearwater and Western Gull?